A mother prepares for space travel 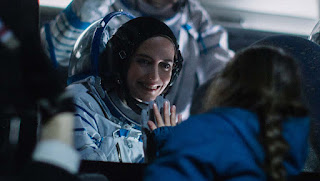 Most movies about space involve a perilous mission: trips to Mars or voyages to even more distant planets. And if sci-fi imperatives prevail, battles with alien creatures are bound to erupt.
Credit French director Alice Winocour for taking a different tack. As emotional as it is calibrated for realism, Proxima tells the story of an astronaut (Eva Green) who prepares for a year-long voyage to Mars while dealing with issues involving separation from her young daughter Stella (Zelie Boulant-Lemesle).
Green gives a remarkably balanced performance as a woman on the cusp of realizing a life-long dream but also grappling with the emotions generated by the prospect of becoming an absentee mother.
Added to the mission at the last minute, single mom Sarah  must arrange to leave her daughter with her estranged husband (Lars Eidinger),  an  astrophysicist with a career of his own.  She also faces a variety of familiar problems, making sure that dad will take care of the family cat , for example.
Green  captures Sarah's agonizing doubts, guilt and sadness. When the prospect of leaving her daughter seems overwhelming, she finds a quiet place and breaks down in tears. At the same time, she perseveres.
Although Proxima places Sarah in a male-dominated environment, nothing about the movie feels heavy-handed. The mission's captain (a fine Matt Dillon) is a man of tempered machismo. A sympathetic Russian astronaut (Aleksey Fateev) rounds out the crew.
In a nicely realized scene, the three astronauts camp out under the stars and recite their favorite poems to one another.
Winocour takes an observational approach to the material, seldom succumbing to melodrama. Sarah's husband has a big career of his own, but he's happy for Sarah. He understands that she's been given an amazing opportunity.
As for Sarah, she's hardly a Wonder Woman. She struggles  with some of the demands of training, which Winocour depicts with exacting detail -- including an underwater exercise that simulates a space rescue.
I've read that Winocour filmed in real training facilities in Europe, Russia, and Kazakhstan, a decision that pays off heavily in terms of credibility.
Authenticity of the movie's many training sequences aside, Proxima stands as mother/daughter story that's beautifully played by Green and an amazingly adept Boulant-Lemesle.
A key incident in the movie's final act left me wondering whether Winocour had made the right choice. I won't reveal it here, but as I watched the movie, it was one of the few times that I had difficulty buying what was happening.
Overall, though, Winocour's movie deftly accommodates its two main strands; it's both a story about a woman who wants to be part of great human adventure and a story about a mother who agonizes over what it means to leave her daughter for a year.
Of course, Eva is one woman -- complex, bold, and keenly aware of her own conflicts. The result: An astronaut movie with plenty of the emotional right stuff.
Posted by Robert Denerstein at 10:35 AM