Who knew? Peter Pan and Alice were siblings 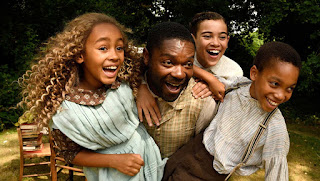 We may not have reached a post-racial moment in reality, but the movies have found one in Come Away, the screen's latest storybook mashup.
Director Brenda Chapman assembles a strong cast as she builds her story around characters from two major tales: J. M. Barrie's Peter Pan and Lewis Carroll's Alice in Wonderland.
Chapman's multiracial cast centers on two children from the Littleton family: Peter (Jordan A. Nash) and Alice (Keira Chansa).  Chapman's storybook movie includes a fair share of dark moments, beginning with the drowning death of a third Littleton child, the whip-smart David (Reece Yates).
Initially narrated by the grown Alice (Gugu Mbatha-Raw), we first meet the happy Littleton family with Mom (Angelina Jolie) and Dad (David Oyelowo) presiding over a joyful brood.
The arrival of Mom's sister (Anna Chancellor) signals oncoming trouble. Chancellor's Eleanor believes that Jolie’s character has married beneath her status. Rather than pursuing a conventional occupation, Oyelowo’s Jack builds models of sailing ships.
As the story progresses, we also learn that a long-standing gambling problem has saddled Dad with debt.

To further complicate matters, young Peter blames himself for his brother’s death. On the eve of David's departure for an elite boarding school, Peter persuaded his older brother to join him in a game that leads to David's drowning.

Chapman, who won an Oscar for directing Pixar’s 2012 Brave, does a fine job bringing the movie’s fantasy elements to life. An overturned rowboat becomes a sailing ship when the kids pretend to be pirates. Chapman wants us to see the world through the eyes of the movie's children.

As is the case with many such fantasies, the theme involves assertions about the primacy of imagination, the suggestion being that the transition to adulthood involves a whole lot of pain.

Packed with incident and plot, Come Away touches many bases and makes room for appearances from such veteran actors as Michael Caine, Derek Jacoby, and Clarke Peters, all of whom sound wildly different notes in Chapman’s sweeping tale, which turns out to be a prequel to more familiar stories involving both Peter and Alice.

The screenplay tilts more heavily toward Peter, emphasizing his insistence on remaining a boy, an enchanted state that  enables him to avoid the tribulations of adulthood that afflict his parents.

I’ve never understood the appeal of perpetual childhood, but Come Away suggests that an unbridled imagination remains the key to freedom.

Chapman can’t fuse all the movie’s varied ingredients and Dad’s encounter with the man to whom he owes money (an impressive David Gyasi) probably gives the movie one plot thread too many.

Still, at its best, Come Away stands as a nicely realized bit of fantasy filmmaking that, like all the best such movies, isn’t afraid to peer into forbidding corners.