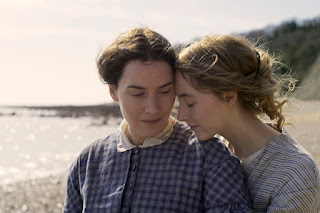 There's very little dialogue in Ammonite, a deeply naturalistic movie about the relationship between two 19th Century women portrayed by Saoirse Ronan and Kate Winslet.
Director Francis Lee places her characters in an environment marked by chill and bleakness, a British coastal town where Winslet's Mary Anning operates a small shop that sells shells, fossils, and curios.
That may sound like a frivolous occupation, but nothing about Anning (based on a real character ) can be considered flighty. An intensely focused paleontologist, Anning has walled herself off from any sort of emotional life.
Mary lives with her mother (Gemma Jones),  a crone who hovers over a mantle full of small canine figurines, sad substitutes for the children she's lost.
Ronan's Charlotte arrives in the movie with her husband (James McArdle), a fossil-collecting enthusiast who wants to study (if only briefly) with Anning. Mary reluctantly accepts the  husband as a student, mostly because he's willing to pay. Mary's mother, knowing they could use the money, insists.
McArdle's character quickly departs, leaving his emotionally and physically depleted wife with Mary, who gradually accepts a role as Charlotte's caretaker and later sexual partner.
Considering that Mary and Charlotte don't have a truly lively  conversation until the movie's third and final act, the work of both Ronan and Winslet must be richly suggestive.
Minimizing dialogue puts a heavy burden on actors; Winslet in particular conveys a raging, embittered inner life while maintaining a frosty exterior. She gets no help from costumes either, spending much of the movie in a tatty blue dress.
Lee does everything possible to ground her movie in physical reality. I should say that I'm partial to movies that commit to showing us what it felt like to live in a specific place at a particular time, everything from food on the table to the crudeness of daily existence.
Interior scenes in Anning's home are dominated by creaking wooden floorboards and the Dorset coast feels like a chastisement, a forbidding mass of mud and rock.
Lee could have done more to highlight Anning's intellect, which takes a back seat to the relationship between two women, both of whom desperately need revivifying.
Charlotte's pallor and depression stem from the recent loss of a child. We don't need to be told that Mary has spent years living with her sexuality in a sternly repressive environment.
Winslet and Ronan approach the movie's sex scenes with an initial tenderness that quickly reveals itself as hungry passion.
It's difficult to watch Ammonite without thinking about last year's Portrait of a Lady on Fire, which also dealt with women in love.
Both movies have a kind of hermetically sealed quality, which in the case of Ammonite, is broken by the welcome presence of Fiona Shaw, as a woman with whom Mary had a previous affair and who, alas, proves more lively than either of the two principal characters, a flower that somehow managed to grow in an environment defined by prehistoric rock.
Posted by Robert Denerstein at 3:35 PM