They're grandparents on a mission 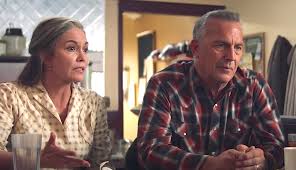 Let Him Go tells a Western story that might have gone down more easily had it taken place during the 1800s. Set in the 1960s, Let Him Go challenges credibility while setting up a battle between two iron-willed women, a mother played  by Diane Lane and an evil matriarch portrayed by Lesley Manville.
Cut from the same mold as the nail-spitting mother Jacki Weaver portrayed in Australia's Animal Kingdom (2010), Manville's Blanche Weboy spits venom as the head of a clan of North Dakotan miscreants who terrorize the area in which they live.
But before we get to the Weboys, we meet Lane's Margaret Blackledge and Kevin Costner's George Blackledge,  a salt-of-the-earth Montana couple who tend to their ranch and can be counted on to do the right thing.
The story kicks off when the couple's son is killed by a bucking horse he's trying to break. Three years later, Lorna (Kayli Carter), the son's widow and mother of the Blackledge's grandson, remarries. Her new husband (Will Brittain) has the word jerk written all over him.
Brittain’s Donnie Weboy insists that Lorna move with him to  North Dakota. Donnie wants to rejoin the Weboy clan. He expects Lorna's son to be raised as a Weboy, which means the kid will grow up to be a mean-spirited bully with no respect for anything but brute force.
Margaret and George understand that their grandson faces a rough time because Margaret saw Donnie slap the kid around and subject Lorna to the same treatment. On top of that, Donnie Weboy never allowed Lorna and her son even to say goodbye.
Properly aggrieved, the grandparents set out to retrieve the boy and save him from the Weboys.
Lane's Margaret takes the lead with Costner's George reluctantly agreeing. A retired sheriff, George has mostl  quit  drinking. He approaches life as if emotions were treasures  meant to be hoarded not spent.
Director Thomas Bezucha, adapting a novel by Larry Watson, wisely keeps the lid on the melodramatic material, which employs flashbacks to show us a key moment when George had to put down Margaret's favorite horse, thus proving that the Blackledges could tough out just about anything.
On the road, the Blackledges meet a Native American man (Booboo Stewart) who ran away from a school where he was abused and deprived of his cultural heritage and who later will be jammed into the plot.
It's possible to abide just about everything about the movie -- its stern view of the West and its unrelenting starkness. And it's refreshing to see a drama in which Lane's determination plays against her husband's vacillations.
But Buezucha ultimately submits to big-screen dictates, turning his movie into a full-scale battle that's as vicious as Manville's character.
Let Him Go plunges into violence as George seeks to rescue his grandson and daughter-in-law and avenge a monstrous act of cruelty the Weboys inflicted on him. Yes, I had to look away from the screen.
It might have been easier to suspend disbelief had the movie been a totally committed act of dramatic minimalism. But a violent finale inevitably arrives, raising questions about whether  this helping of true grit wants to be taken more seriously than it deserves.
Posted by Robert Denerstein at 1:35 PM