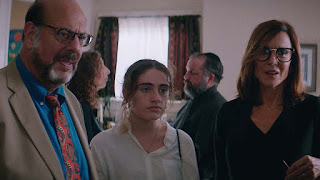 A post-funeral Jewish comedy, Shiva Baby mixes ethnic stereotyping, fluid sexuality, and a young woman's uncertainty about her future in ways that don't always mesh. But mismatched ingredients may be the point of director Emma Seligman's comedy.
Shiva Baby bounces the frustrated energies of its characters against the cramped walls of the small house in which most of the movie takes place. Fortunately, there are enough laughs to keep you from screaming.
Rachel Sennott plays Danielle, a New York college senior who's earning extra money by carrying on a sex-for-cash relationship with a slightly older man (Danny Defarrari).
To please her parents, Danielle attends a shiva for a departed family member. There, she makes a surprising discovery.  Not only is Defaarari's character at the same shiva, he's married to a blonde shiksa (Dianna Agron). To top things off, the couple has a baby.
For Danielle, the occasion -- a gathering to mark the period of mourning and comfort the bereaved -- immediately turns fraught.
Danielle's parents are sharply drawn, perhaps overly so. Fred Melamed plays Danielle's mostly clueless father. Danielle's stronger mother (Polly Draper) nags at the daughter she clearly loves. She also tries to steer Danielle away from a childhood friend (Molly Gordon) with whom she has had a fling.
The comedy revolves around what the characters don't know and what they know but refuse to acknowledge, a good basis for farce although Shiva Baby over-relies on close-ups and jokes about the mourners' obsession with food tend to be repetitive. And, at least in my view, the movie's stereotypes sometimes morph into wince-inducing caricature.
Draper, Sennott, and Gordon give the movie's best performances. Draper's humanity undercuts her character's more stereotypical traits. Sennott conveys the deep confusions of a perilously ungrounded woman, and Gordon allows honest intelligence to break the surface of cliche.
So, I'd sum up this way: If Seligman were a chef, I'd say she hasn't created a totally satisfying meal but she succeeds in bringing many of the movie's ingredients to a rolling comic boil.
Posted by Robert Denerstein at 4:10 PM