Refugees stuck in a strange “Limbo’ 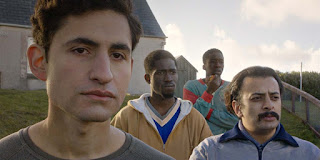 Being stuck in the middle of nowhere strikes me as bad. Being stuck in the middle of nowhere and having no idea whether you'll ever leave is even worse, a state in which life goes into  suspended animation.
Such is the backdrop for Limbo, a sometimes sad, sometimes whimsical comedy about refugees who've been sent to a Scottish island to await further disposition.
Director Ben Sharrock builds his story around Omar (Amir El-Masry), a Syrian refugee who hopes that he'll be granted the political asylum that will allow him to emigrate to London.
A musician by trade, Omar carries his grandfather's stringed oud in a large case that accompanies him everywhere, a double-edged symbol of both his creative possibilities and an inescapable past.
Omar, who refuses to play, lives in a house with an Afghani refugee (Vikash Bhai) and two West Africans (Ola Orebiyi and Kwabena Ansah). Bhai creates the most memorable of the movie’s supporting characters, a strangely optimistic fellow who wants to become Omar's agent.
To fight off boredom, the men watch endless episodes of Friends. No reflection on Friends, but at this point, the show isn't exactly on the cutting edge.
Omar visits the island's only phone booth to check in with his mother and to receive reports about the older brother who remained in Syria to fight with the rebels.
Sharrock appreciates the preposterousness of the situation. He begins with a scene in which a group of refugees receives ridiculous lessons in cultural awareness.
The instructor (Sidse Babett Knudsen) tries to teach the men the difference between appropriate and inappropriate behavior when it comes to women.  Bemused and neglected, these men have little need of instructions that caution them against grabbing a dancer partner's rear end.
Sharrock wisely refuses to stereotype the island's permanent residents. A local youth (Lewis Gribben) initially seems hostile but, like many others, proves more good-natured than he  seems. The locals can be as confused as the refugees.
None of this is to say that Sharrock takes the plight of refugees lightly and the movie includes tragic events that don’t quite fit into Sharrock’s deadpan mix -- but that doesn’t keep Limbo from striking unusual notes as it observers its characters' agonizingly thwarted lives.
Posted by Robert Denerstein at 3:35 PM