A calm splash through choppy waters 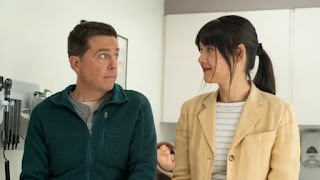 He’s single but wants to be a father. She needs money so that she can go back to school. A $15,000 payday helps her decide to become the surrogate that carries his baby.  The non-couple attend counseling and follow the recommended procedures for surrogacy but have difficulty defining boundaries.
That’s about all you need to know about the plot of Together Together, a comedy starring Ed Helms and Patti Harrison. Director Nikole Beckwith packs lots of potentially fractious issues into her movie but wisely avoids beating us over the head with any of them.
Still best known for his work in The Hangover movies, Helms always has struck me as an actor whose great distinction involves looking entirely average, something on the order of the  neighbor who owns all the nifty tools you might want to borrow but never will buy.
In this outing, Helms distances himself from brash comedy and creates a real character, a fastidious, determined, sometimes annoying app developer who's determined to become a father.
Harrison adds the movie's charm, bringing wit to the role of a woman who works as a barista but clearly aspires to something more.
For much of Together Together’s 90-minute running time, Helms and Harrison engage in awkward conversations as they struggle to find the appropriate level of intimacy for a surrogate and an expectant father.
Some of the gaps between Helms' Matt and Harrisons' Anna are generational. He's 46; she's a 20something.
Matt gets testy when Harrison’s Anna has sex during the early days of the pregnancy. He fusses about her diet as she casually charts what she believes to be a safe course.  You half get the feeling that if Matt could become pregnant, he would.
Beckwith's screenplay provides a bit of backstory.  Anna hasn't spoken to her parents in years. His parents (Nora Dunn and Fred Melamed) don't quite understand their son's decision, but don’t play much of a role in the story.
Romance isn't on Beckwith's mind. Matt and Anna get to know each other in halting tentative ways that seem realistic enough for strangers who are sharing an intimate and highly personal experience.
Matt and Anna share a bond based on mutual appreciation. They become friends, but it’s unclear whether they will or should become anything more.
Essentially, a two-hander, the movie adds a few supporting characters, notably a young gay man (Julio Torres), a fellow employee at the cafe where Anna works as a barista. Tig Notaro appears as the therapist with whom Matt and Anna periodically meet. Sufe Bradshaw has a nice turn as the unflappable technician who performs ultrasounds on Anna.
Generally pleasing, Together Together scores a low-key victory. Matt and Anna may not always know how to relate to one another or to the situation they're in, but there's nothing insincere about them -- a rarity in movies.
Posted by Robert Denerstein at 2:10 PM