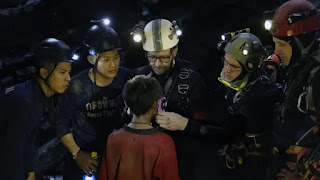 Ron Howard's Thirteen Lives can be regarded as a procedural; i.e.,  a straightforward account of a story in which 12 boys and their soccer coach were stranded in a flooded cave in Thailand.
The event -- which happened in 2018 -- captured the world's attention as a team of divers combatted monsoon rains while trying to locate the boys and figure out how to extricate them from the cave.
So, a procedural, yes, but one that tells an incredible story about a team of international divers and Thai Navy Seals who, after 18 days guided the boys to safety.
Difficult to begin with, the task became nearly impossible because the boys had to be equipped with diving gear that would enable them to breathe as the divers navigated treacherous waters and narrow passageways.
Howard introduces five divers played by Colin Farrell, Viggo Mortensen, Joel Edgerton, Tom Bateman, and Paul Gleeson.
Mortensen and Farrell receive the most attention as divers who don't always agree. The story also deals with tensions between Thai authorities, the Thai military, and the foreigners who arrived to help.
The Thai characters aren't especially well-developed but neither are the principal divers, who are given sketchy backgrounds.
The characters spend little time interacting with one another in ways unrelated to the rescue mission, so it's up to the actors to suggest deeper character traits. Credit Mortensen, Farrell, and Edgerton with doing as much as they can in this regard.
Howard and cinematographer Sayombhu Mukdeeprom up the dramatic ante with rescue sequences that involve a decision that's best discovered in a theater, presuming you don't already know it.
The movie's underwater scenes must have been difficult to film but they tend to become slightly repetitive as divers make multiple trips through tunnels of the cave to save the boys.
I expected an emotionally richer film from Howard whose filmography includes the gripping Apollo 13. He's working with a subject that seems firmly located in his wheelhouse but Thirteen Lives proves more resolute than inspiring.
I don't think it's a spoiler to say that we know the outcome of such a well-known story from the outset. Aside from becoming international news, the rainy season rescue also is the subject of Rescue, a well-regarded 2021 documentary. But whatever its limitations, Thirteen Lives still has an amazing story to tell.
Posted by Robert Denerstein at 3:10 AM