Catholic warriors on the march 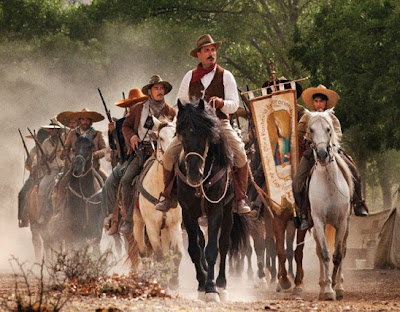 If a superior historical movie is defined by its ability to infuse a subject with thought-provoking urgency, For Greater Glory mostly misses the mark.

Despite a ton of battle footage and an underdog story that pits a rebel army against a superior Mexican federal force, director Dean Wright's wannabe epic has the washed out blandness of a work that's ultimately limited both by a diffuse script and by its faith-based commitments.

Overly long at two hours and 20 minutes, For Greater Glory revolves around an obscure chapter in Mexican history, the bloody Cristero War that took place between 1926 and 1929 and which saw a group of Catholics take arms to preserve their right to practice their religion.

Mexican president Flutarco Calles, an excellent Ruben Blades, becomes the primary oppressor. The screenplay depicts Calles as a cruel and zealous upholder of the Mexican constitution of 1917 which contained a variety of anti-clerical strictures designed to limit the power of the Catholic Church. In practice, foreign priests were deported, some priests were murdered and churches were desecrated.

A scattered story tries to find focus in the person of General Gorostieta Velarde (Andy Garcia), a retired military officer who's asked to lead the rebel forces. Though skeptical about Catholic dogma, Velarde believes in religious freedom. He ultimately takes the job.

A bland Garcia doesn't do enough with the doubt that must have wracked a man such as Velarde, who -- according to the movie -- eventually was moved to reaffirm his Catholicism by a 12-year-old boy's Christ-like sacrifice.

Several familiar faces crop up in supporting roles. Looking as if he might at any moment be blown away by a stiff wind, a frail Peter O'Toole appears as a priest who's executed by the Federales. And Bruce Greenwood shows up as the U.S. Ambassador to Mexico, a diplomat trying to broker a peace that serves U.S. interests.

The For Greater Glory trailer makes a big deal out of the fact that Eva Longoria appears in the movie. Longoria sheds the desperate housewife trappings of her TV fame to become the devout wife of General Velarde: Because Velarde spends most of the movie away from his family, Longoria doesn't get all that much screen time.

Earnest to a fault, For Greater Glory doesn't look hard enough at the contradiction within the rebel forces; i.e., fighting and killing to practice a religion built around the teachings of Christ. A warrior priest played by Santiago Cabrera might well have received more attention, perhaps at the expense of yet another battle.

Now, as for the movie's religio-political agenda: A Washington Post article published on May 24 reported that "For Catholics enraged by the Obama administration’s proposed contraception mandate, the film about the Mexican church’s fight in (the) 1920s is a heartening and timely cinematic boost in the American church’s battle to preserve 'religious freedom' in 2012."

I wouldn't classify For Greater Glory as entirely propagandistic nor do I think that the film will ignite Passion of the Christ levels of controversy, but, as the Post article suggests, even with an "R" rating, For Greater Glory dovetails with the objectives of some Catholic organizations. The Knights of Columbus, for example, devotes an on-line page to resources for promoting the movie.

Some will see all of this as an enhancement, but even those in total synch with the movie's values may find themselves growing antsy during its long march to glory.


Posted by Robert Denerstein at 3:30 PM