It looks like a video game. Too bad you have to watch it instead of playing. 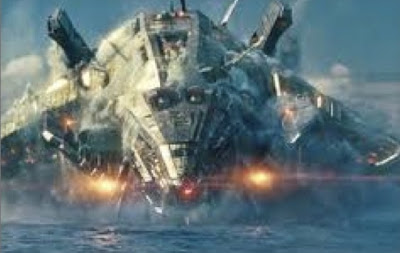 Terrible dialogue, ear-splitting noise, an uninspired premise, patriotic pandering, booming close-ups and an ocean full of cornball sentiment help sink the action movie Battleship not long after it leaves port. Derived from a Hasbro board game, Battleship is one of those lamentable movies that seem to have been assembled from spare parts taken from other movies. You'll find the cacophonous metal-on-metal abrasions of the Transformer movies, the fist-pumping bravado of movies such as Top Gun and a sic-fi premise that could have been lifted from any number of aggressively commercial entertainments from director Michael Bay. You know the drill: An alien force is about to invade the Earth. It falls to a slacker hero (Taylor Kitsch) to save humanity by finding his emerging manhood and leading the charge against the aliens. A large cast features several highlighted performances: Alexander Skarsgard of True Blood fame == plays Kitsch's older brother, and Brooklyn Decker portrays Kitsch's love interest. She's the daughter of an admiral (a little seen Liam Neeson). Director Peter Berg piles on the heavy action, much of it built around chaotic camera movements and frenzied editing. The aliens, once revealed, are disappointing creatures. Maybe it doesn't matter because most of the time, we can't' see them anyway: They're hidden by armored suits that make them look as if they were conceived as action figures long before there were jammed into this orgy of destruction. Berg takes a bow toward The Greatest Generation in an effort to blend contemporary war heroes with those from our more glorious World War II past, but the whole business comes off as rigid salute to the kind of courage found only in movies, bolstered, of course, by a megaton barrage of CGI. Did I say the movie is loud? Think of it this way: Experiencing Battleship is like listening to a symphony composed entirely of cymbal crashes.