The rise and fall of a Texas funeral director

A flower blooms in a small Texas town -- and his name is Bernie. 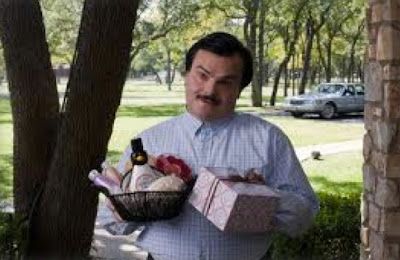 Bernie Tiede was a solicitous assistant funeral director in the tiny Texas town of Carthage. Marjorie Nugent was Carthage's richest widow, a woman known for her meanness of spirit. Bernie (Jack Black) prided himself on providing service with a sensitive smile and praise to Jesus. Perhaps convinced that even the town ogre couldn't help responding to his irresistible warmth, Bernie befriended Marjorie (Shirley MacLaine).

Bernie eventually gave up his job at the Carthage funeral home to become Mrs. Nugent's aide and confidant. He prospered. He traveled with her. She found someone to assuage the loneliness she wouldn't admit to having, but she never lost her taste for delivering a punishing remark. No matter what else happened, Marjorie never allowed Bernie to forget that he had been put on this Earth to respond to her every demand.

One day or maybe it was in one frustrated moment, Bernie snapped. He shot Marjorie four times with a rifle. She died, a fate that often befalls those who suffer multiple rifle wounds.

Bernie, a seriocomic movie from director Richard Linklater, is based on a true story taken from a magazine article by Skip Hollandsworth, who co-wrote the movie's screenplay with Linklater. Mixing actors and real Carthage townsfolk, Linklater comes up with a movie that should be celebrated -- not because it deals with murder -- but because it exudes the kind of regional flavor that's difficult to come by in today's homogenized movie climate. Linklater's movie is Texas to the core.

Black's fans are in for a surprise. His Bernie is a Jesus-loving graduate of funeral director school who also preaches and sings at the local church. Bernie prides himself on his neat-as-a-pin appearance, and has a slight mincing quality to his gait. Bernie may be light in the loafers, as one townsperson unoriginally puts it, or he might just be a kind of rare Texas flower that blooms in a small town that can't always tell the difference between sincerity and salesmanship. Hell, neither can Bernie?

I couldn't look at Black without thinking that Bernie probably overdoes it in the cologne department.

Looking as if someone had just force fed her a lemon, MacLaine creates a character who seems to have been born sour and remained that way.

Black and MacLaine -- as unlikely a screen pairing as I ever expected to see -- are terrific together. She hectors and bullies Bernie. He tolerates her until the moment he loses his patience and picks up that rifle.

Linklater spends a lot of time introducing us to Bernie and to Carthage. In an early scene, Bernie addresses a group of aspiring funeral directors, teaching them the finer points of mortuary science, things like how to keep the eyes of the deceased from popping open, always a cause for alarm.

The second half of the picture deals with the way in which Bernie tries to cover up his crime and the trial that follows his arrest.

In district attorney Danny Buck, Matthew McConaughey has found a role he really was born to play, a country bumpkin whose strategy involves turning Bernie into an effete alien who knows things like which color wine goes with which kind of food and who can pronounce a few common French words. Scandalous.

Buck finds himself at odds with the good people of Carthage, some of whom think that Bernie may have done the world a small favor when he sent Mrs. Nugent to her eternal reward. They're outraged that Buck has been granted a change of venue for the trial, shifting the proceedings to another small Texas town where (as one character puts it) the people are likely to have more tattoos than teeth.

Linklater, the director of movies as wide-ranging as Slacker, Waking Life, Before Sunset and Me and Orson Welles, has come up with a winning oddball of a movie. Having real people -- most of them naturally funny -- comment on Bernie and Mrs. Nugent makes us appreciate the comic tone Linklater has chosen for the movie. It's not imposed on the material, but stems from a living, breathing reality.

Bernie may be guilty of minimizing murder a bit, but it also maximizes local flavor. And that's something movies very much need.


Posted by Robert Denerstein at 3:30 PM