A dark and beautiful 'Snow White' 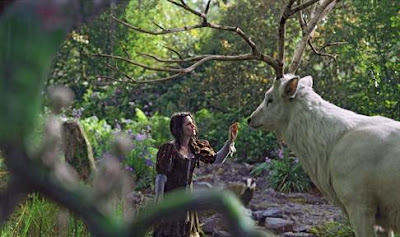 First off, I can't imagine that the world breathlessly awaits another version of the Snow White story, even one set in a Medieval world that provides fertile ground for some of the best special effects of a still-burgeoning summer.

So it's up to the makers of Snow White and the Huntsman to convince us that their movie is not just another link in a long chain of pointless summer diversions, particularly when we've already seen Mirror Mirror, another attempt to revive and reinterpret the Snow White tale.

If there's a compelling reason for Snow White and the Huntsman, it can be found in the many imaginative ways director Robert Sanders puts real darkness back into Snow White, a fairy tale mostly associated with the Brothers Grimm, who knew how to give kids the willies, and with Walt Disney, who knew how to create cuddly dwarves, seven of them in fact.

This Snow White has no dwarves named Happy or Sleepy, and never winks at the audience. Playing almost every scene straight, Sanders tells the story of how Evil Queen Ravenna (Charlize Theron) takes over a kingdom, imprisoning Snow White (Kristen Stewart) in a castle tower.

Daughter of the king Ravenna murdered and rightful heir to throne, Snow White, of course, escapes. With the help of several allies, Snow White stages a comeback in which -- after being resurrected from the dead -- she dons Joan of Arc-like armor and leads a band of displaced warriors into a brutal battle with the queen and her army.

In one of its neatest tricks, the movie plays games with scale, employing a notable crew of British actors to portray the dwarves, a surly bunch of bandits who help validate Snow White's claim to the throne, a spot that rightfully belongs to someone with a pure heart.

Among the dwarves, look for Ray Winstone, Toby Jones, Bob Hoskins and Ian McShane. And, yes, you will wonder what brand of digital sorcery Sanders and his cohorts employed to make grown men seem as if they were a mere four feet tall.

So what motivates the queen? Once abused by a lover, she's been striking back ever since. When Ravenna looks into her prized mirror to ask the key question about who's the fairest of them all, the mirror melts into a golden statuesque figure that speaks to her in deep Vaderesque tones.

The queen's evil brother and toady-in-chief (Sam Spruell ) joins The Huntsman (Chris Hemsworth) as he tracks the fleeing Snow White. The Huntsman -- who has been duped by the queen -- quickly changes sides and becomes Snow White's principal protector, with help from rival William (Sam Claflin), a devoted friend from Snow White's childhood.

Working from a script by a quartet of credited writers, Sanders produces some wonderful effects as Snow White's quest takes her through a dark forest, a village populated by women and an enchanted forest where fairies dwell. There, Snow White receives the blessing of a majestic white elk, a moment that underlines her unity with the natural world.

The Queen, of course, stands in opposition to the natural way of things: To sustain her youthful beauty, she sucks the life out of young women. She fears nothing more than the ravaging onslaughts of age.

Sanders, who's making his feature debut, would have done well to ask Theron to tone down her performance, particularly in moments in which the queen rages at the nearest lackey. Stewart, of Twilight fame, doesn't project the pristine beauty that has become a pop-cultural cliche when it comes to Snow White, but she's up to the task of transforming into a young woman who gradually understands the weight of responsibility she's carrying. Hemsworth, best known for playing Thor in the Avengers series, does well as an embittered widower. And Spruell is appropriately obnoxious as the Queen's brother.

All of this goes on too long, but if Sanders isn't great at building momentum or varying the movie's tone, he sure knows how to take side trips. Even as I thought about how I might trim 20 minutes from the movie's 127-minute running time, I maintained interest in a story that's lavishly and alluringly dark. This Snow White is at its best when it's most attuned to courtly spectacle, mysterious forests, and enchanted landscapes, vital ingredients of many a well-created fairy-tale world.