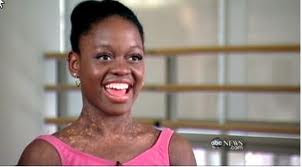 Youth America Grand Prix is a ballet competition open to students ranging from eight to 19 years old. The annual competition has become a major event in the world of ballet, probably because the prizes are big. Winners can receive scholarships to prestigious dance schools and even contracts with major ballet companies. For the young men and women who emerge victorious, doors to careers can be flung open. Watching First Position -- a documentary about the competition and some of its competitors -- can be deeply moving because of the dedication and enthusiasm these talented young people display. I'll mention only one of the six youngsters that director Bess Kargman follows as she builds toward the finals. Fourteen-year-old Michaela DePrince (shown above) arrived in the U.S. after being orphaned in Sierra Leone. Hardly the delicate, fine-boned figure of ballet cliche, DePrince has a powerful athlete's body and spectacular skills. When the competition arrives, DePrince must decide whether to compete despite having suffered a debilitating ankle injury. If DePrince's story doesn't inspire you, you probably can't be inspired. Kargman's film intrigues and informs -- as far as it goes. I wish Kargman had delved deeper into the effect this kind of high-powered competition has on children, particularly those who don't win. I also wondered why she didn't deal with the kind of body obsessions that can put dancers on the road to dangerous eating disorders. (Disclosure: Through the making of a film and later involvement with The Eating Disorders Foundation in Denver, I've learned to take such matters seriously.) First Position doesn't qualify as the definitive documentary about kids and competition, but it opens the door to a world that may require deep and early commitment for even the most talented youngsters to have a shot at success.