The end of the world and other matters

ABEL FERRARA TACKLES THE DEATH OF EVERYTHING 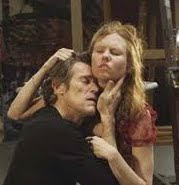 What would you do if you knew that the world was going to end today? No loopholes. No escape clauses. You and the rest of humanity are about to become extinct. That's the question that director Abel Ferrara -- perhaps best known for the scabrous cop drama Bad Lieutenant -- asks in 4:44 Last Day on Earth. Judging by the movie's two main characters (Willem DaFoe and Shanyn Leigh) the answer goes something like this: You'd pretty much do what you always do -- only with a heightened consciousness that you were living your final hours. Leigh plays an artist who paints in the couple's New York loft; DaFoe portrays a reformed drug addict. So what happens? A delivery kid shows up with Chinese food. DaFoe calls his daughter from a previous relationship. The couple makes love, argues, meditates and prepares for the worst. Ferrara surrounds DaFoe and Leigh with TVs (always on), computers and smart phones, making us wonder whether even the end of the world can't be experienced without some form of electronic mediation. Those familiar with Ferrara's work will find a softer, less heated approach in a movie that's not nearly as pretentious as Lars von Trier's Melancholia, which also dealt with the end of the world. Although Buddhist lectures and an interview with the Dalai Lama sometimes play on TVs in the background, neither character in 4:44 Last Day on Earth seems to be asking big questions. The point, one supposes, is not to imagine the end of all humanity, but to encourage thought about what really should matter to us. The movie blames man-created holes in the ozone layer for the approaching doom. But let's face it: The difficult truth, the one we seldom choose to acknowledge, is that any day could be our last. DaFoe and Leigh sometimes seem to be improvising, which means there are awkwardly acted moments, but there's also an undeniable quality of exhausted resignation about 4:44 The Last Day on Earth, a feeling that stems from knowing that there will come a moment when the universe puts a period at the end of each of our meager sentences -- and from thinking that all of humanity could reach a point when there will no next generation to set things right.

A THIEF IS TOPPLED FROM HIS ARROGANT PERCH 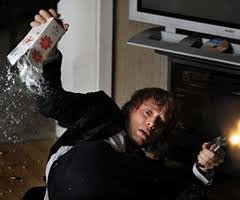 The Norwegian film Headhunters begins as if it's going to be a crackling thriller about a corporate headhunter who, in his spare time, steals art. In this full-time executive and part-time thief, director Morten Tyldum has found an interesting character, and actor Aksel Hennie imbues him with the kind of arrogance that accrues to someone who thinks he's putting something over on the world, even if he's not sure his run of unearned luck can last. Hennie's Roger Brown has a beautiful wife (Synnøve Macody Lund), a stylishly modern home and lots of possibilities for new art thefts. He also has an accomplice (Elvind Sander), a worker at a security firm who (for a price) shuts off the alarms at the homes Roger burglarizes. Roger's life changes on the day that he's approached by a confident CEO type (Nikolaj Coster-Waldau), who's looking for a new job. The movie then turns into a kind of cat-and-mouse game revolving around a valuable painting that has come into the possession of Coster-Waldau's character. We suspect something particularly strange is up when Coster-Waldau's character begins to reveal his background. He's a former special forces guy who worked for a company that has invented all kinds of high-tech tracking devices. Tyldum eventually switches gears, turning the movie into a disturbing game of can-you-top-this with Roger falling into one terrible trap after another. I'll spare you the details, but the squeamish should exercise a bit of caution here. Tyldum has a refined taste for macabre visual sight gags, and it should tell you something that Headhunters already has been slated for an American remake, perhaps because Tyldum builds the story around imaginatively conceived and steadily escalating physical horrors and perhaps because the movie's view of corporate types is fashionably unflattering. Headhunters is involving to be sure, but I couldn't help thinking that it's also one more movie looking for outré ways to distinguish itself from the rest of the indie pack.