A invitation you may want to refuse 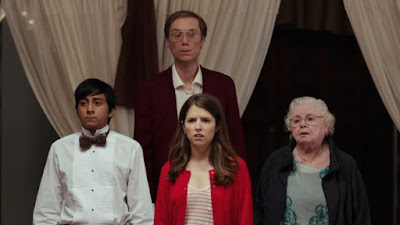 If Table 19 were a pilot for a TV sitcom -- which tells you something about the level of the humor in this dismal comedy -- it might not survive 20 minutes of a meeting on whether to the project deserves a green light. Despite the presence of the usually lively Anna Kendrick, director Jeffrey Blitz can't animate a screenplay by Jay and Mark Duplass. Either the director wasn't up to what the Duplass's were trying to achieve (an off-kilter mixture of comedy and seriousness) or the material wasn't up to snuff. Either way, Table 19 winds up falling flat on its face. A wedding comedy about those assigned to the worst table at a reception, Table 19 casts Kendrick as the former best friend of the bride who was banished from maid-of-honor duties when the bride's brother (Wyatt Russell) dumped her. The rest of the table includes June Squibb, whom you'll remember from Nebraska, as a pot-smoking former nanny to the bride. Also on board: Lisa Kudrow and Craig Robinson, as an Ohio couple with marital issues; Tony Revolori (of Grand Budapest Hotel), as a horny teen who's in constant phone touch with his nagging mother; and Walter (Stephen Merchant), a geeky embezzler who's the father-of-the-bride's disgraced nephew. Before service at Table 19, where all the principals are seated, concludes, Blitz has introduced terminal cancer, marital discord, and slapstick involving the wedding cake. The movie opens with Kendrick's distraught Eloise agonizing over whether to attend the wedding or send regrets. I think you know where I stand vis-a-vis accepting an invitation to this anemic affair.