Entirely predictable, Life generates tension -- but not much else. 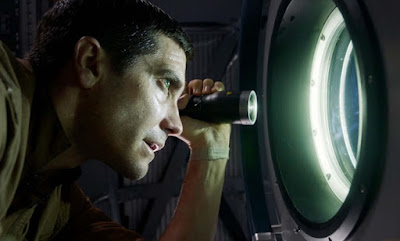 Life arrives in theaters as another Alien clone -- only like most derivative movies, it's not nearly as good as the original.

The best thing about Life may be its depictions of the crew of an international space station floating through extravehicular missions or taking care of daily tasks in the space-station's gravity-free environment. Gliding through the station's narrow corridors looks like it might be fun -- at least for 10 or so minutes.

The story follows a standard alien-on-spacecraft arc. The crew finds carbon-based life in soil samples from Mars -- or something like that. The science officer brings the simple, single-cell creature to life by feeding it glucose. What begins with wonder and awe quickly sours as this simple cellular creature develops into a predatory, octopus-like monster with a face that may remind you of the deep-space monster in Alien.

Once the monster makes its predatory intentions clear, the crew must fight for its life -- and to keep this creature away from Earth. The creature is dubbed Calvin by school children on Earth where the discovery initially is celebrated.

Director Daniel Espinosa ably turns the tension crank as he mixes two marquee names -- Jake Gyllenhaal and Ryan Reynolds -- with a lesser known cast, making Life an ensemble piece in which no single character really stands out. British actor Ariyon Bakari makes a bit of an impression as the station's chief science officer.

Movies such as Life can't really work if we're not repelled by the alien creature's eating habits. The monster's tentacles probe the throats of its victims as it embraces them with a combination of waving tentacles and what appear to be stingray-like wings. Someone describes the creature as a deadly mixture of muscle, brain and eye, which is pretty much what the movie tries to be -- albeit with intermittent success.

Much attention has been given to creating a credible space station, which helps with plausibility. Life offers no wild-eyed futuristic version of space travel, but takes place in the bland near-future.

Don't forget, though, it was the industrial strength cynicism of the original Alien, as well as its hideously vicious creature, that made for such a compelling experience. Life offers tension, but without much of an accompanying vision to elevate it. Gyllenhaal's character voices distaste for life on a conflict-riddled Earth, but that's about it for philosophical musing.

Terror about making contact with another form of life hardly constitutes a novel story line, and the movie's conclusion proves relatively easy to outguess.

It's possible that Life will turnout to be a placeholder or maybe a warm-up act for Ridley Scott's soon-to-be-released Alien: Covenant. I was hoping for more.