If you're thinking about becoming a veterinarian, you'll want to avoid this school. 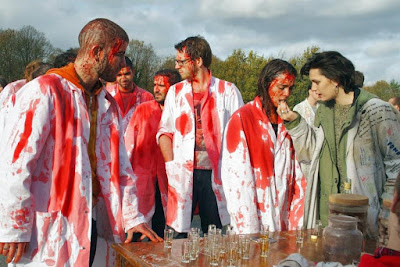 That's a good thing if you put a premium on shocking imagery presented with an eye that understands how to compose and light a bone-chilling image and not such a good thing if you're a squeamish viewer with an aversion to gore, even when wrapped in a surpassingly stylish package.

The movie tells the story of Justine (Garance Marillier), a young woman who enrolls in a veterinary college to pursue what those around her recognize as her superior talent for the profession. But this is no ordinary school. The students must endure a week of hard-partying and hazing that includes chowing down on a piece of raw rabbit kidney.

This bit of culinary torment poses a particular challenge for Justine who has been raised by her parents as a staunch vegetarian. Justine immediately develops an awful rash from her exposure to meat. The taste of flesh also arouses a cannibalistic urge that Justine will find difficult to resist. Be warned.

As it turns out, Justine's sister (Ella Rumpf) already is enrolled in the school. The relationship between the sisters allows Ducournau to explore issues connected to sibling rivalry. Rumpf's character seems intent on indoctrinating Justine into the repulsive behavior that they share.

Marillier does a fine job showing the stress experienced by a young woman who's trying to come to grips with urges she didn't know she had -- and, in this case, which isolate her from nearly everyone. Her gay roommate (Rabah Nait Oufella) becomes a witness to her evolution.

I did plenty of grimacing during Raw, which also contains an unexpected lesson in primary color mixing. As part of the hazing, Justine has her body painted blue and is forced to make love to a male student whose body has been painted yellow. They're not allowed to leave the room until they both turn green, and if you can watch Justine sampling her first finger without cringing, you've got a stronger stomach than I.

I'm not sure that Raw entirely keeps its allegorical promise, but I don't want to dismiss Docournau's talent, which is substantial if not yet fully realized in the script she wrote.

Making adept use of the veterinary school environment, Ducournau immerses us in a world in which the students are oblivious to the macabre sights around them. We're in a world gone mad, and without much by way of relief. No wonder the students party so ferociously. It's as if they want to throb their way out of the misery of the animals they dissect and treat -- and possibly out of their own desperation.