Shooting up in Scotland again

A highly stylized and very loopy sequel to 1996's Trainspotting. 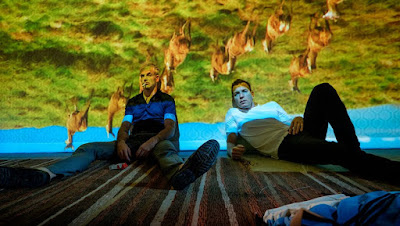 That fun-loving, heroin-shooting gang from Trainspotting, director Danny Boyle's 1996 stylistic plunge into down-and-out life in Edinburgh, is back for a second helping in T2 Trainspotting. In what amounts to a case of big-screen recidivism, Boyle allows echoes from the first movie to resound throughout a boisterous second helping. Boyle brings non-stop energy to a movie that attempts to create poignancy about the way childhood friendships can devolve into tattered adult lives.

A simply plot involves attempts by the group to open a high-end brothel, but the real fun of T2 consists of reuniting with familiar characters who retain substantial amounts of their old humor, uncontrollable brutalities and criminal preoccupations. These guys are all 20 years older, but not a hell of a lot wiser.

When Ewan McGregor's Mark returns to Scotland from Amsterdam, he's hardly surprised to learn that his former cronies are upset with him for having absconded with funds they all should have shared.

The movie's gallery of maladjusted men includes Mark's pals Simon (Jonny Lee Miller) and Spud (Ewen Bremner). Then there's the psychopathic Begbie (Robert Carlyle), the thuggish lout who escapes from jail to seek revenge against Mark and to reunite with a wife and son who aren't exactly overjoyed about his return. Sharing space with Begbie is like living with someone who keeps a loaded gun on the nightstand.

Part of the movie's enjoyment involves seeing how these actors have aged. Sporting a closely cropped haircut and neatly trimmed mustache, Carlyle seems to have added bulk that makes Begbie as physically threatening as ever.

Still showing traces of his youth, Simon has taken up with a Bulgarian refugee (Anjela Nedyalkova), promising her that she'll be in charge of the brothel he wants to build, euphemistically calling it a spa in what John Hodge's mildly satirical screenplay offers as an example of Edinburgh's march toward gentrification.

T2 doesn't have much on its mind, but it's buoyed by Boyle's relentlessly stylized approach, which includes flashbacks, quick cuts, freeze frames, overly saturated colors and lots of splash.

Trainspotting was seen as a breakthrough film. T2 lacks the electrifying juice or novelty of its predecessor, but it's enjoyable in a loopy way -- even if it is an exercise in superfluity. Credit Boyle with specializing in upbeat movies about downbeat lives. 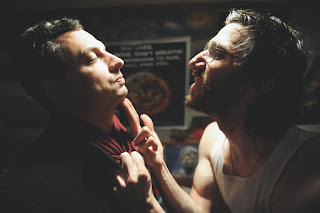 If you're looking for a better movie about what happens when former pals reunite, try Donald Cried, a comic indie set in Rhode Island during a bleak winter. A Wall Street banker (Jesse Wakeman) returns to his hometown after his grandmother passes away. Wakeman's Peter has the misfortune of losing his wallet on the bus trip he took to his desolate destination. The subsequent lack of funds forces Peter to hook up with an old high school buddy (Kris Avedisian). Avedisian, who also co-wrote and directed, plays Donald, a character who manages to be both innocent and offensive at the same time. Avedisian's Donald is the high school guy who was tolerated by his buddies, who always tried to keep him at arm's length. Inadvertently abrasive in nearly everything he does, the shaggy, ill-kempt Donald never seems to have left his high-school self behind. Wakeman and Avedisian play off one another in ways that are funny, nervy and realistic. Avedisian's Donald is a wounded soul who nonetheless retains his pluck, and that makes Donald Cried a weirdly bracing comedy about the clash between those who want to leave their hometown behind and those who never will escape its hold.
Posted by Robert Denerstein at 3:35 PM