She navigates a new life as a cyborg

Scarlett Johansson stars in Ghost in the Shell, a visually stunning but flawed version of a much-admired Japanese anime series. 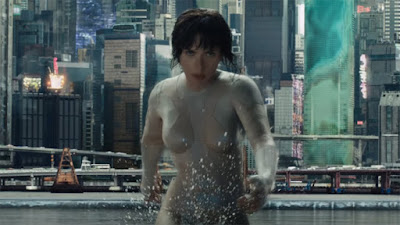 The makers of Ghost in the Shell, a live-action version of a story that stems from a revered 1995 anime offering by Mamoru Oshii, have spared no expense trying to move the awe needle by creating a visual environment that befits an amazingly conceived future world.

Led by director Rupert Sanders, the Shell team places their movie somewhere between reality and imagination. Those who feared that this version would somehow diminish their feeling about the achievements of the original will have their own take on the movie. I'm not a purist, so this edition didn't bother me. Besides, there' nothing to stop anyone from watching the original, which derived from a manga comic.

Now for the controversy: Some commentators have been upset by the selection of Scarlett Johansson for the role of Major Motoko Kusanagi, a cyborg who strives to bring evildoers to justice. An American star playing a Japanese character? Surely, this role should have gone to an Asian actress, certainly a powerful argument.

The counter argument revolves partly around commercial considerations. A big-ticket production needs a big-ticket star. Perhaps to appease critics, the character Johansson plays is referred to only as "Major." I've also read that the filmmakers explain the ethnic shift by telling us that the character who died and whose brain was transplanted into a cyborg was Japanese. Johansson's cyborg ... well ... it's a synthetic creation that has been designed to look ethnically neutral and, yes fanboys, sexy in a flesh-colored, body-clinging suit that makes Johansson appear to be naked.

But its background as much as sensuality that qualifies Johansson for the role. She played an alien in 2013's Under the Skin. She's handled action in 2014's Lucy. And she's been an entirely artificial character, as the off-screen voice of a computer operating system in Her (2014).

I don't know if it constitutes high praise, but Johansson makes a pretty good cyborg, a character who's haunted by slivers of memory from her former human life.

To the extent that the movie has intellectual concerns, they revolve around questions of what exactly makes a person human. The idea is that advanced cyborgs are inhabited by what the movie refers to as "ghosts;" i.e., the souls of humans who have been developed into entirely new creatures -- in this case under the supervision of Dr. Ouelet (French actress Juliette Binoche speaking with an American accent).

There were times when I wished that Sanders (Snow White and the Huntsman) would wipe away a low-impact story and simply let us wander around the city he has created, an urbanscape where giant hologram advertisements are projected from buildings, where high-rise apartments reach for the sky and the streets feel alluring and alive.

Aside from Johansson, the rest of the cast is relegated to true supporting roles. Pilou Asbaek appears as Batou, Major's loyal and totally human partner. Takeshi Kitano plays Aramaki, a human who's not to be trifled with and who has an empathy for the cyborg plight. Michael Carmen Pitt portrays Kuze, a mysterious, hooded cyborg. Peter Ferdinando has been given stand-out moments as Cutter, a sinister character who runs a company that develops robots.

Some of the human characters have been "enhanced; i.e., they've chosen to develop certain parts of themselves with cybernetic infusions, something I thought about on the ride home from a preview screening as I debated about making yet another appointment with a chiropractor about recurrent back issues.

Fair to say, though, that Ghost's overwhelming visual achievements tend to dwarf any serious consideration of what it means to be human and an action-enhanced story tends to do what a surfeit of action sequences generally do -- numb our sensibilities, a liability that, for me, was abetted by Clint Mansell and Lorne Balfe's trance-inducing score.

So where do I come down on this mega-production that's probably going to cement Johansson into a long-running franchise? If you want to be overwhelmed by visuals, have at it. If you're looking for a high degree of involvement in a compelling story, be a little wary. And if you want to see a perfect fusion of story and visuals, you may want to be even warier.