An exiting movie about a Le Mans race

Matt Damon and Christian Bale rev up their performances in an entertaining Ford v Ferrari. 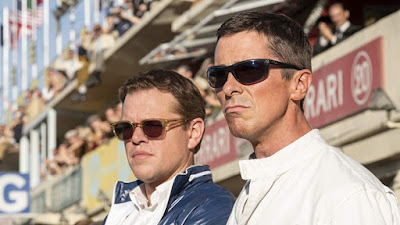 As a person who doesn't know much about auto racing, I can't say I approached Ford v Ferrari with any kind of rooting interest. But good movies about specialized areas draw us into their worlds so that we don't mind listening to the characters when they discuss the technical aspects of building a better race car, in this case, Ford's GT 40 MK II.

Besides, we need no instruction to know that driving at speeds exceeding 150 miles per hour, sometimes in the rain, puts life and limb at risk, particularly in a grueling 24-hour race such as Le Mans.

Director James Mangold's movie succeeds, at least in part, because he puts a strong cast behind the story's wheel. Matt Damon portrays Carroll Shelby, a Le Mans winner, who reluctantly retired from racing (health issues) and later was invited by Ford to help develop a car that could win Le Mans, something Ford hadn't been able to do on its own.

Damon's Shelby turns to Ken Miles (Christian Bale), a skilled British driver with a knack for engineering. As it turns out, Miles and Ford are not an ideal fit. Independent and headstrong, Miles has no interest in team play. As a result, Shelby finds himself forced into the role of mediator, trying to placate image-conscious Ford executives while preserving Miles' involvement in the Le Mans project.

Bumps in the road are hit as the movie showcases its various personalities.

Notable among these is the prime mover behind Ford's build-up to the 1966 Le Mans race. Looking as if he's channeling Bale's performance as Dick Cheney in Vice, Tracy Letts creates a Henry Ford II who has little interest in Le Mans until Enzo Ferrari (Remo Girone) humiliates him. Ford approached Ferrari about a merger. Not only does Ferrari snub Ford, but he also belittles the American motor czar.

At the time, Ferrari had become a habitual winner at Le Mans; Ferrari couldn't believe that Ford, which (ugh!) mass-produced cars, could mount worthy competition.

Mangold, (Logan, The Wolverine, 3:10 to Yuma and Walk the Line) knows how to keep a movie moving, which is good because Ford v Ferrari runs for two and a half hours. And, no, I didn't think the movie needed to be that long.

Still, the two main performances are never less than watchable. Damon plays a confident, savvy Texan who specializes in boldness. As Miles, Bales knows when to rev his motor to the right degrees of intensity.

Miles' supportive wife (Caitriona Balfe) never stands in the way of her husband's passions. When Shelby and Miles fight outside of the Miles' home, Mrs. Miles pulls up a lawn chair and watches with amusement. Miles' son Peter (Noah Jupe) follows his dad's races with the kind of admiration an adoring son has for a heroic father.

Mangold makes sure that the race footage hums with excitement. He also sustains backstory tension, keeping just enough off-track focus on the rivalry between Henry Ford II and Enzo Ferrari when the story arrives at Le Mans. Ferrari disdains the American who sometimes allows his marketing guy (Josh Lucas) to gum up the works, as marketing guys are wont to do in movies about men for whom racing isn't a promotional activity but a way of life.

For those unfamiliar with this true-life story, the movie may seem to cross the finish line in a way that's more downbeat than you'd expect, a slight veering from the formula line that Mangold deftly toes.

To its credit, though, Ford v Ferrari seems to know exactly what kind of movie it wants to be; that makes it an entertainment that should deliver for both racing and non-racing fans.