When no one wants to know the truth

Adam Driver stars in The Report, a movie about a senatorial aide who tries to uncover the real story behind CIA torture. 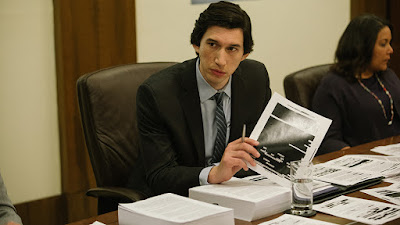 Adam Driver's single-minded intensity perfectly suits the character of Dan Jones, a Senate aide charged with investigating the CIA's use of torture in the days following 9/11.

Jones's boss -- Annette Bening's Sen. Dianne Feinstein as chair of the U.S. Select Committee on Intelligence -- supports him but exercises more caution than Jones would like.

It makes for a heady conflict, the committed truth-teller vs. the politically astute senator who wants to find the truth but who can't avoid playing all the angles. It works because Bening's too nuanced an actor to let us push Feinstein into the box of caricature.

If you're looking for a political slant, know this: The movie tries to balance anti-Bush leanings with a slam at the Obama administration, which wasn't eager to see Jones's report see daylight, either. Jon Hamm appears as an Obama aide who insists that his boss knows the score, even if he doesn't want to spread it across the nation's headlines.

Director Scott Z. Burns has assembled a fine group of supporting actors in what amounts to a by-the-numbers procedural about the ways one branch of government tries to exercise oversight over a government agency that relies on secrecy.

Maura Tierney portrays a CIA agent of single-minded intent; i.e., she sees nothing wrong with what became known as "enhanced interrogation techniques;" i.e., waterboarding and other forms of humiliation. Corey Stoll plays a lawyer who, at the film's opening, tries to school Jones in the unhappy fate of whistleblowers.

We also learn that the enhanced interrogation techniques were developed by independent contractors (Douglas Hodge and T. Ryder Smith) who challenged CIA agents who believed the best way to obtain information was to convince detainees that an agent was on their side. The argument: Not only were the enhanced interrogation techniques immoral; they didn't work.

Burns, who wrote the screenplays for The Bourne Ultimatum and An Inconvenient Truth) dutifully follows the drama as it depicts Jones's five-year effort to discover the truth. He also offers unflinching views of some of what the CIA did to detainees in its fruitless efforts to get the jump on terrorism.

The Report sometimes lacks the pulse-pounding excitement we expect from political thrillers, but it's a serious effort and it offers a rare view of the kind of person who can’t be sidetracked. For Jones, learning exactly what happened becomes a near-sacred duty.