Charms, yes, but the original had more kick

Best thing about Frozen II: The creativity of its animators. 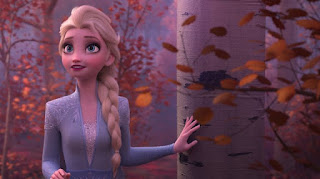 Two sisters -- Kristen Bell's Anna and Idina Menzel's Elsa -- reunite in Disney's Frozen II, a sequel to the 2013 smash that also spawned a Broadway show. Familiarity no doubt will breed success for this sequel directed by Chris Buck and Jennifer Lee, who also directed the first installment. Set three years after the conclusion of the earlier movie, Frozen II reintroduces us to the kingdom of Arendelle, where Elsa presides and Anna plays the annoying (but endearing) younger sister. And, yes, there are songs, which some will find memorable but which are of a kind that, for me, tended to evaporate from consciousness a few seconds after they concluded. Songwriters Kristen Anderson-Lopez and Robert Lopez have added seven new songs to the mix, the most notable being of them entitled Into the Unknown. A fairy-tale plot centers on a voice that's calling to Elsa from deep within an enchanted forest where the Northuldra people reside and where Elsa eventually will discover massive rock creatures that stomp heavily into (or on) the plot. The movie brings back other characters from the first edition, most notably the snowman Olaf (Josh Gad) and Anna's handsome but clueless boyfriend Kristoff (Jonathan Groff). Olaf still provides the comic relief, this time with a song called When I'm Older. Elsa, you'll recall, has powers that exceed those of the other characters. She can turn things to ice, which makes me wonder why Disney doesn’t send her to the Arctic to work on the world’s melting glaciers. It's up to Elsa to help settle a long-standing dispute between Arendelle and the inhabitants of the forest. For me, the best part of Frozen II involved fanciful animated sequences. The movie also hits the now-requisite female empowerment themes. I thought the original had a little more kick, but as franchise sequels go, audiences could do worse. Still, I feel obligated to provide a small warning: If you're allergic to Disney-style enchantment, you may want to chill somewhere other than Frozen II. Of course, you'll probably find yourself in a distinct minority.
Posted by Robert Denerstein at 9:35 AM