Director Trey Edward Shults plunges us into a family drama in which style surpasses story.. 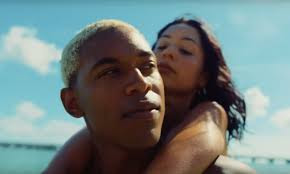 From its opening shots, it's clear that Waves -- a movie about the difficulties faced by a middle-class black family -- refuses to be ordinary. Director Trey Edward Shults creates an illusion in which it feels as if the movie's images are enveloping us. A simple shot of a girl riding a bicycle pushes us into a world that surrounds us and begins to work its ways on us, jarring us out of indifference.

Shults (Krisha) takes a dare with his movie. First, he bets that a white director can capture black life in South Florida without dipping into the treacherous waters of cultural appropriation. Second, he divides his movie into halves -- focusing first on the family's son, a championship wrestler played by Kelvin Harrison Jr. In the second half, Shults draws attention to Emily (Taylor Russell), the family's daughter.

The pace and concerns of the movie's two halves are radically opposed. Initially, Shults barrels his way through the story of Harrison's Tyler, a high-school wrestler whose future looks so promising, we can't help but think that the rug will be pulled out from under him. We wait for tragedy and it eventually arrives with shocking force.

The second half of the movie deals with how Tyler's sister adjusts after the devastations of the first half. The movie proceeds to draw a slightly different picture of the family's father (Sterling K. Brown), the owner of a construction company who pushes his son hard in the first half and who softens with his daughter in the movie's final chapter. We also gain new insight into the family's mother (Renee Elise Goldsberry).

Shults keeps the movie's emotional life close to the surface as he pushes into the teen world Tyler occupies. The first indication that Tyler may be headed for trouble occurs when he injures his shoulder. He doesn't tell his hard-driving father. He begins swiping pain pills that his father uses for a bum knee.

Tyler's father insists that his son perform: "We can't afford the luxury of being average," he says. "We have to work 10 times as hard as others."

It's one of the ways in which race becomes part of the movie's fabric, a realization that ordinary striving isn’t good enough for black achievers. Over-drive becomes a necessity.

Somewhat predictably, the kid who couldn't possibly fail becomes mired in drugs and alcohol. He also breaks up with his girlfriend (Alexa Demie) when he learns that she's pregnant. She refuses to get an abortion. Tyler begins to see his golden future circling a drain.

In the film's second half, Emily meets a boy (Lucas Hedges) who brings her out of her shell. I'm not sure the relationship really computes, but it forces Emily to extend herself, to begin to see beyond the borders of the world in which she was raised.

Hedges' Luke has father problems of his own and the script (unwisely, I think) branches out to include them.

Shults knows how to italicize the emotions in a scene and as a visual stylist, he immerses us in whatever location his camera finds.

I know people who question whether a white director should have made this movie, even one that brims with cinematic invention. A shot in which the camera revolves around a couple in a moving car is dizzying, as is much of the rest of the movie.

The two leads -- Harrison Jr. and Russell -- totally commit to Shults' approach, but I can't say that I totally bought Shults’s movie. When you step back from it and consider the story, Waves looks an awful lot like a conventional melodrama. I leave it to others to judge whether Shults' grasp of a black milieu is credible. He was smart to set his story in an integrated high school environment and that helps him.

Still, I wondered whether Shults wasn't guilty of piling woe on his characters.

Heaven forbid Tyler should have admired his father and had sense enough not to get his girlfriend pregnant. Suppose he had gone to college followed by medical school — all the time negotiating the tensions of being black and successful in a country that hasn’t fully faced its racist past, much less its present.

And what if Emily’s foray out of her grief and confusion arrived when she met a young black man who reached out to her? Or maybe a black female classmate?

But, hey, I’m just thinking out loud about a movie that I found visually exciting, disorienting and a bit troubling — all at the same time. Let me put it another way: I was caught up in the movie but when I reflected back on it, I thought more about Shults' vision than I did about the characters. I'm not sure that's a good thing.