'63 Up' continues a fascinating journey 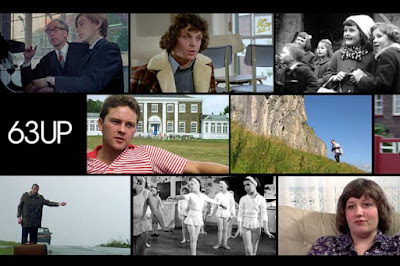 I'm not going to say a great deal about 63 Up, aside from stating the obvious: There's never been anything quite like it and we're lucky to have it.

The latest in director Michael Apted's long-running series continues to follow the lives of a variety of Brits, who we first encountered when they were seven. Appearing in seven-year intervals, the movies in the Up series remain essential viewing for anyone who has seen one or more of the films, which began in 1964. Apted's documentaries have become a touchstone for moviegoers; they mark milestones in the lives of the movie's subjects and also in the lives of those who faithfully have viewed them.

In 63, Apted includes enough references to the earlier films to refresh the memory of veterans or to allow newcomers easy entry.

As a study of class differences in Britain, Up has much to say. But as time wears on, the movie also allows for reflection on loss and the diminishing horizons that accompany aging.

If you're among the film's many fans, you'll approach 63 with many questions. You'll want to know, for example, how Tony, the kid with the Cockney accent, has been faring. Is he still driving a taxi? Is he as spunky as ever?

Does the well-spoken, well-educated John still ply his trade as a barrister? And where does he stand on Brexit?

And what of Lynn and her life as a wife, mother, and librarian?

A few hints: Mixed race Symon, who was raised in a group home, may finally have settled into a groove. In a constant battle with depression, Neil has loved and lost since we saw him seven years ago. Nick, who became a physics professor in the US, is dealing with throat cancer.

Sometimes heard off-camera, Apted can be chided by his subjects for asking questions they find irrelevant, but you can tell that both director and his subjects have grown accustomed to one another -- if not always entirely comfortable with a lifetime of cinematic intrusions.

Apted is 78. The next chapter of this irresistible and still evolving saga will be due when he's 85. I hope Apted is here to make it and that we're all here to see it. Fingers crossed.

Email ThisBlogThis!Share to TwitterShare to FacebookShare to Pinterest
Labels: 63 Up, Michael Apted