Aeronauts reunites Eddie Redmayne and Felicity Jones for an adventure that's fine so long as it doesn't touch the ground. 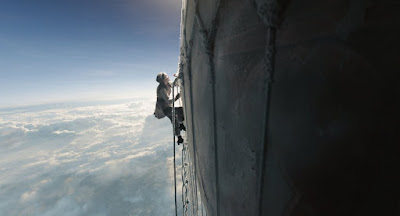 After their joint appearance in The Theory of Everything, Eddie Redmayne and Felicity Jones reunite for a story about a scientist who enlists the help of a balloonist with a flair for show business.

Based on a real character, Redmayne's James Glaisher hopes to convince Britain's rigid scientific establishment that meteorology should be accepted as a legitimate scientific pursuit. In the 19th Century, predicting the weather evidently was not considered possible.

Harper immediately sketches personality details for each member of his adventurous duo. Amelia is the daring one; Redmayne's James takes a more cerebral approach to balloon flight. He's less interested in thrilling the gathered crowd than in collecting atmospheric data.

Amelia understands the importance of grand gestures. To make sure that the onlookers are adequately thrilled, she throws her cute little dog off the rising balloon. The crowd gasps. Not to worry. The dog is attached to a parachute.

Amelia, by the way, is a fictional stand-in for Glashier's real partner, Henry Coxwell. Perhaps to give the movie some feminist charge, Amelia disregards the advice of Antonia (Phoebe Fox), the sister who thinks Amelia should stay home and tend to domestic matters.

Amelia's backstory also involves the guilt she feels about her late husband's demise. Vincent Perez plays Amelia's husband, also a balloonist, in one of the movie's many awkward flashbacks.

None of this provides viewers with much reason to see The Aeronauts. But audiences may wish to seek out this adventure because of its aerial sequences, one of which -- a true stunner -- arrives when Amelia must climb to the top of the balloon to deal with a failure that needs to be righted before the balloon can descend.

At a height of 35,000 feet, both Amelia and James are in danger of freezing to death.

There isn't much else to say about the Aeronauts. One might summarize this way: Balloon footage (good); the rest (meh).

One note: If you haven't seen Harper's Wild Rose, the story of an aspiring country singer from Scotland, you ought to give it a look. It was released earlier this year.