The crazy world of a New York jewelry salesman -- and gambler. 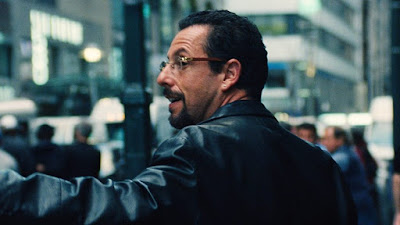 Desperate and out-of-control, Howie Ratner -- the main character in Uncut Gems -- still manages to retain sparks of hope. He can't allow himself not to believe in the future. A long-shot basketball bet will pay off. The relationship with the woman he keeps in a Manhattan apartment won’t go haywire. At the same time, he’ll be able to maintain his Long Island family life.

Most of all, the raw opal Howie illegally purchased from Ethiopia will be the big one, the score that allows him to eliminate his gambling debts and find something resembling security.

But wait. I misspoke. Howie isn't interested in security. He's interested in wheeling and dealing. He wants to be a rainmaker and he tries to capitalize on anyone who holds promise, say an NBA star -- Kevin Garnett as himself -- who visits Howie’s Manhattan shop. Garnett falls in love with the opal, which Howie plans to sell at auction.

Suddenly, there’s another ball to juggle. How can Howie keep Garnett on the hook and also deliver the diamond to the auction house at a previously agreed upon time?

That's a plateful of story and the movie’s directors — the Safdie brothers (Josh and Benny) — needed the right actor to keep its wheels spinning. Turns out the right actor is Adam Sandler. Equipped with slightly protruding teeth and wearing a leather jacket, Sandler's Howie speeds through life like a man trying to skate across dangerously thin ice. He's loud and abrasive and it's not easy being around him. That's where Sandler's ability to transmit rays of hope proves useful.

We don't want to get too near to Howie, but we also can't look away. Maybe he's even dislikable enough for us to hope that he crashes. Is that the payoff we want from the movie or do we want to see Howie navigate dangerous waters and emerge whole?

The Safdies also introduce us to some of Howie’s unseemly associates, which include some very mean men to whom Howie owes a great deal of money. The movie could have been called Howie’s World.

Filming in free-wheeling style and making maximum use of New York City locations, the Safdies allow Howie's mix of anxiety and ambition to drive the story, offering some unexpected developments along the way. Far from being a bimbo, his mistress (Julia Fox) actually cares about Howie. Who’d have thought?

We also meet Howie's wife (Idina Menzel), a woman who long ago ran out of patience with her husband. Judd Hirsch portrays Howie's dad, offering a glimpse of the what could be read as the origin of Howie’s personality.

All of this takes place under the sharp eye of Darius Khondji's restless camera, which adds to the frenzy. The Sadies virtually dare us to keep pace.

Proceed at your own risk, but if you choose to stay home, you'll miss a movie about the latest in a long line of characters who dare to dream big -- even if they don't always have what it takes to make those dreams come true,.