It’s just not the cat’s meow 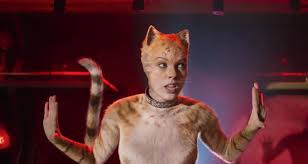 Although Cats became one of the longest running shows in Broadway history, I have to confess that the popular Andrew Lloyd Webber production remains unknown to me.

I understand that Memory, perhaps the musical’s best song, has attained stand-alone status. And for a show to have run that long, it must have struck a chord with those who shelled out to see it.

Now, Cats arrives on screen with a large cast of human actors who have been subjected to a digital process that coats them in fur and gives them tails that can sway as languidly as laundry in a gentle breeze.

I’m sure it’s not true, but something about the way the cats move made me think that the whole production had been filmed in slow motion.

So let me get to the point. Without a frame of reference — i.e., other performances of Cats —- I didn’t quite know what to make of director Tom Hooper’s big-screen version, aside from telling you that once I got past the movie’s major gimmick — singers, dancers and actors covered in fur — I was mostly indifferent.

I do know that Cats derives from a T.S. Eliot poetry collection entitled Old Possum’s Book of Practical Cats. It seems odd to me that Eliot, author of The Wasteland, would refer to himself as Old Possum, but I don’t believe Wikipedia would lie.

The movie’s high point: Jennifer Hudson’s version of Memory broke through the stuporous spell under which I had fallen. She practically cried the song. Spoiler alert: Hudson plays a cat who is selected to begin a new life that’s better than the one she has been living. She ascends into some sort of cat heaven — or something like that.

I could have lived for another 100 years and not regretted having missed Ian McKellen delivering a monologue as Gus, the Theater Cat. McKellen, of course, nails it, but seeing McKellen in mangy looking cat fur tended to diminish the scale of the theatrical accomplishment — at least fo me.

But the greatest cat transformation award goes to Judi Dench, who plays a character called Old Deuteronomy — or, for short, Old Deut, perhaps the worst nickname ever imagined by anyone for anyone.

With luxurious skeins of fur draping across her shoulders, Old Deut looks like a woman who hasn’t gotten the message. Fur is out, baby. Somehow, though, Dench projects an air of regal authority and dignity, proving that it’s impossible to make Dench look ridiculous no matter how hard one tries.

Other cast members include Idris Elba, Taylor Swift, Rebel Wilson and James Corden. Elba plays the bad cat who believes he should be selected to ascend into cat heaven. I mention them for want of anything much else to report.

All this takes place in a society of Jellicle Cats. We meet the Jellicles when Victoria (Francesca Hayward), a kitten, is tossed from a car, lands in their company, and provides the movie with its beginning.

Hooper, who directed the screen version of Les Miserables, photographs the dancers stretching and preening with such great care, I wondered if each movement contained secrets that I was being invited to unpack. If so, I missed them.

Evidently, lack of plot is a Lloyd Webber signature. Maybe that’s why Cats doesn’t so much progress as it presents a musical number here, introduces a new character there or wanders about its set.

I suppose all the cat slinking and rubbing is meant to be sexy, but it also seems a bit kinky, like a Halloween party in which everyone wore similar costumes and, late in the evening, started thinking about behaving badly.

So, in conclusion, I say to Old Deut, you have not convinced me. I remain resistant to conversion. I am now and forever, a dog person. Hiss if you will, but to you I say, arf or maybe arf and one half.


Posted by Robert Denerstein at 1:10 PM