Director Sam Mendes, with a mighty assist from cinematographer Roger Deakins, takes an audience on a harrowing World War I journey. 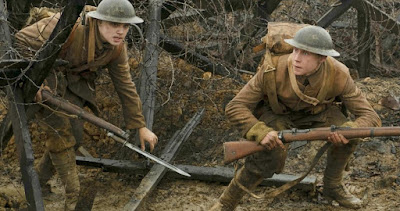 World War I has inspired any number of great movies: All Quiet on the Western Front (1930), The Grand Illusion (1931), Paths of Glory (1957) and director Peter Jackson's recent documentary They Shall Not Grow Old (2018) to name a few.

That long-ago war remains of particular interest to filmmakers because it provides directors with advantages. As a pre-Nazi war, battle depictions can be brutal without demonizing the enemy. In World War I, soldiers from both sides can be portrayed as ordinary men who happen to be wearing different uniforms, making the insanity of war seem even more pronounced.

On top of that, the war marked a kind of end of global innocence, a prelude to even worse depravities -- although it's difficult to think of any form of combat more grueling and awful than the trench warfare of the so-called War to End All Wars.

Now, director Sam Mendes, fresh off two recent Bond movies, has entered the World War I fray. I'm betting that every review you'll read will make note of the fact that Mendes and cinematographer Roger Deakins have created the illusion that their movie is unfolding in real-time. They skillfully create the impression that the movie consists of a single sustained shot, a gambit that isn’t without payoff. We can't escape the surreal horror that Mendes and Deakins create in their effort to portray the ferocity of battle.

1917 qualifies as one of those movies for which the script could have been written on the back of a napkin. The screenplay by Mendes and Krysty Wilson-Cairns focuses on two British soldiers (Dean-Charles Chapman and George MacKay) who are sent on a mission that takes them out of muddy trenches into the terrifying No Man's Land that separates them from another battalion of British soldiers.

The men are ordered to stop the nearby battalion from launching a massive attack because British intelligence has learned that the Germans lie in wait. The Germans plan to slaughter the advancing Brits.

Mendes makes just enough effort at character development to keep the movie from hollowing out. Chapman’s Blake is eager to execute the mission because his older brother serves in the battalion that's about to be decimated. MacKay's Schofield was selected to accompany Blake before either soldier knew what they were being asked to do.

The more reluctant of the two, MacKay's character senses that they've been given a mission they’ll be lucky to survive.

Once the men depart the relative safety of their unit, the movie becomes an episodic account of their travails -- which include a stop in a abandoned, rat-infested German bunker, an encounter with the pilot of a German plane that has been shot down and a brief visit to a ravaged town where Deakins creates images of fiery devastation that border on madness.

It's not the movie's single-shot illusion that proves most indelible; it’s the haunting imagery of 1917: mutilated bodies strewn across the devastated terrain, a solitary cow grazing outside an abandoned farmhouse; and an encounter that one of the men has with a French woman who's hiding with her infant as chaos rages around her.

Mendes wisely doesn't explain how the combat we're seeing fits into a larger picture. Neither of these two soldiers knows anything but the daily grind of attempting to survive.

And although Colin Firth and Benedict Cumberbatch appear in cameo roles, reliance on faces that may be less familiar to big-screen audiences enhances the movie's authenticity. We plunge into the action without the distractions of star turns.

At times, 1917 threatens to become an edge-of-the-seat action movie, particularly in a sequence involving swirling rapids. Is Mendes trying a little too hard to sustain excitement?

Perhaps, but 1917 qualifies as an impressive piece of immersive cinema with plenty of white-knuckle moments and an undisguised appreciation of the courage of men who learned not to dwell on the horrors they were witnessing, at least not in the moment. We know, of course, that as time passes, harrowing sights will remain vivid in the memories of the men who saw them. Some of them will haunt us, as well.