A giddy (maybe too much so) ‘Little Women’ 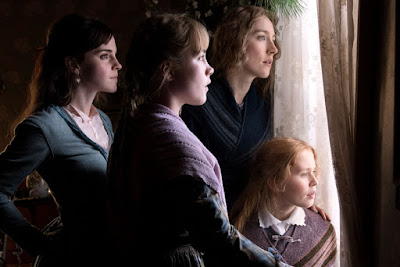 Greta Gerwig has directed the seventh version of Louisa May Alcott’s Little Women to reach the big screen. First published in 1868, Alcott's novel has passed through so many generations that I remember my mother mentioning it to a female cousin of mine who's now in her 80s.

As a member of the generation that grew up watching black-and-white movies on TV, I’ve seen director George Cukor's 1933 version, which starred Katharine Hepburn as Jo March. As a reviewer, I admired the 1994 version in which Winona Ryder portrayed Jo under Gillian Armstrong's direction.

So much for my Little Women bona fides.

In Gerwig’s version, we meet the sisters of the title after they’ve already become adults. Putting chronological storytelling aside, Gerwig moves the narrative backward and forward in ways that struck me as initially confusing but probably will present less of a problem for Little Women devotees who don't need a scorecard to keep up with the characters.

Gerwig and editor Nick Houy proceed at the kind of frantic pace that you might expect from someone who was trying to stay one step ahead of a tax collector. This distractingly giddy tone is augmented by Alexander Desplat’s score, which — truth be told — sometimes seems intent on becoming as prominent as one of the characters.

Eventually, the story begins to cohere, thanks in no small part to the fine cast that Gerwig has assembled.

Saoirse Ronan lands the role of Jo and brings every bit of ambition and hurt to a character who has become a women’s lit staple.

Early on, Jo -- who aspires to be a writer -- brings a story to a publisher (Tracy Letts). Although Letts' character accepts the work, the movie's main point is made: Women should secure their future by marrying. The world doesn't have much use for strong, independent-minded women who want to forge their own way.

As Letts' character puts it, a woman's story either should end in marriage or death.

Ronan captures Jo’s growing determination — not to mention her resistance to the advances of the young man who loves her (Timothee Chalamet's Theodore Laurence). The movie includes one of the great scenes of rejection when Jo tells Theodore that they'd make a terrible match. This time, it's the guy who's crushed.

Florence Pugh, seen earlier this year in Midsommar, gives the movie’s most surprising performance as Amy, the sister who paints and connives and who, of course, ultimately loves Jo and all her sisters. Relationships strain but the bonds of sisterhood prevail.

Neither Ronan nor Pugh imprisons her performance in period trappings. Both seem as if they exist both and in the present and in the 19th Century; the story takes place during the Civil War and is set in motion by an absentee father. Mr. March (Bob Odenkirk in a piece of unexpected casting) has gone off to be a chaplain to the Union's troops, leaving the sisters and their mother (an excellent Laura Dern) to keep the home fires burning in Concord, MA.

Emma Watson plays Meg, the sister who seems to have totally adjusted to the idea of home and hearth. Jo pushes Meg to assert herself as an actress but Meg insists that she finds her fulfillment in domesticity.

Sister Beth (Eliza Scanlen) plays piano and is assigned the thankless task of providing the movie's great tragedy when she contracts scarlet fever.

Early on, there's a suggestion that Jo might find happiness with Friedrich Bhaer (Louis Garrel), a French professor of languages, but she pushes him aside when he insults her writing.

Chris Cooper has a nice turn as Mr. Laurence, grandfather to Chalamet's Theodore, who everyone calls "Laurie." And Meryl Streep turns up as Aunt March, a woman who sometimes plays the role of family scold but who takes Amy to France for painting, culture, and grooming for marriage.

At times, Gerwig puts speeches about female assertion into the mouths of the characters, making points that already have been dramatized. It's a form of underling that the movie didn't need and which seems like an unnecessary bow to contemporary gender demands.

None of this is to say that the period isn't well-represented. Cinematographer Yorik Le Saux, production designer Jess Gonchar and costume designer Jacqueline Durran all should be credited for first-rate work.

Like so many before her, Gerwig clearly loves the material. Many will love the movie back. Forgive me for being someone who would have liked it more had Gerwig, especially in the early going, not seemed to be straining to keep the movie lively.

Posted by Robert Denerstein at 12:10 AM

Do the performances override any pacing problems and make this worth seeing? Thanks.

Well, it’s not just pacing that bothered me, it’s the distressingly exuberant tone the movie adopts, particular at the outset. Beyond that I didn’t find much gain in the way that Gerwig replaced chronological order with a more fragmented structure. But to answer your question: Yes, the performances mostly are worthy, but I’d say movie fans should see “Little Women” because it’s going to figure heavily during the awards season and because it has received glowing endorsement from most critics, thus raising the alarming (and somewhat unlikely) possibility that I could be wrong in my unwillingness to jump up and down with excitement.