Food, yes, but character, as well 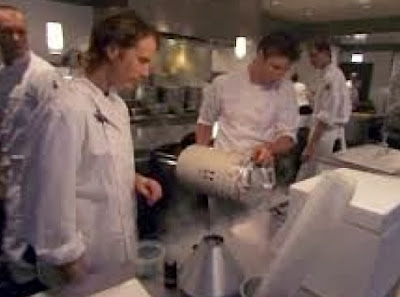 One restaurant specializes in dishes such as squab inspired by the artist Miro. Another offers down-home country fare. And a third features Mexican cuisine derived from dishes the chef's mother makes. These restaurants are located, respectively, in Chicago, Iowa and Arizona. For a time, it seems as if director Joseph Levy's documentary, Spinning Plates, is going to be a study in contrasting cooking styles -- from arty to the point of refinement to basic, stick-to-the-ribs fare.

But as Levy's movie progresses, it becomes increasingly clear that the human stories behind these restaurants constitute the real main course: I won't spell out every twist and turn, but I will tell you that difficulties experienced by the movie's main characters range from stage four cancer to destructive fires to devastating economic woes.

The movie focuses on three characters: Grant Achatz operates Chicago's acclaimed Alinea; Mike Breitbach is the sixth Breitbach to operate Breitbach's Country Dining in Balltown, Iowa, and Gabby Martinez is the chef at La Cocina de Gabby, an Arizona restaurant she runs with her husband, Francisco.

Levy's movie emerges as a display of American diversity across a variety of economic and social situations.

Although the movie's shifts between the three stories can seem a bit arbitrary, you can tell what Levy -- a former Food Network producer -- seems to have in mind. I think he wanted to show that cooking involves passion and commitment, and so does living through adversity.

Spinning Plates would have benefited from a bit of commentary that at least wondered why high-priced Alinea thrives while a Mexican restaurant like La Cocina struggles. Spinning Plates misses the kind of interpretive perspective that could have tied the movie's three stories -- each quite compelling -- together.*

*With all due respect to Achatz, whose culinary methods blend science and art and who has confronted more than a normal share of personal difficulties, I couldn't help wonder what a meal at Alinea might cost. On the day I checked the restaurant's Web site, a fixed-price meal was set at $210. Devotees of the restaurant -- according to enthusiastic reviews found on Yelp -- note that a meal might run between $300 to $600 per person after drinks, tax and tips. The restaurant sells tickets, usually two-to-three months in advance.(The movie points out that preparation for a single course might require as many as five people to spend 12 hours in the kitchen, which I suppose is part of the reason that the restaurant is so pricey.)

Hey, I like fine dining as much as the next person, but isn't it possible to view Alinea as an alarming expression of culinary elitism? OK, so maybe a meal can be a bona fide art experience, an occasion replete with creative displays of food and abundant visual wit, but when you remember that the average recipient of food stamps receives about $134 per month* -- less than $1.50 per meal -- it's difficult not to bypass sticker shock and go directly to depression. I presume that not everyone who eats at Alinea is super-rich: Dedicated foodies may save as long as necessary to support an evening's splurge. More power to them.

But don't let any of my reservations about dropping $600 for a meal -- not matter how amazing -- stop you from seeing Spinning Plates: The people behind the food make the movie worthwhile, no matter what other conclusions you draw.


*According to the Feeding America web site.

Posted by Robert Denerstein at 9:30 AM