'The Great Beauty' is aptly named

An Italian film that dazzles the eye -- and doesn't neglect the mind, either. 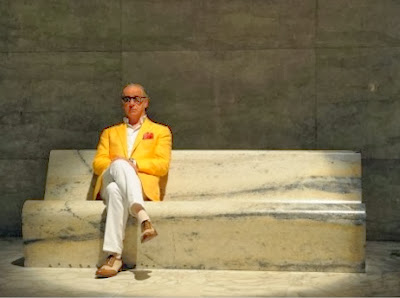 Like a beautiful river in spring, director Paolo Sorrentino's The Great Beauty overflows with sights that re-awaken our sense of what cinema can accomplish, the way it can startle the eye and activate the senses.

Some critics have viewed The Great Beauty as a descendant of Federico Fellini's La Dolce Vita (1960), a look at debauched Roman life that takes place 53 years after Fellini assayed the same subject. Comparisons with Fellini are further fostered by the fact that the main character in both movies is a disaffected journalist.

Sorrentino must have been aware of his film's kinship with La Dolce Vita, but it would be irresponsibly wrongheaded to view The Great Beauty as wannabe Fellini. The movie speaks in its own voice and has its own concerns.

The Great Beauty centers on Jep Gambardella (Toni Servillo), a writer who started his career as a novelist and shifted to journalism, a craft he seems to practice only sporadically.

Jep might be the living embodiment of squandered potential: He wrote one high acclaimed novel, and never wrote another. Instead of developing his art, Jep devoted his life to Rome's near-decadent social scene: He's an unashamed party animal, a man for whom parties can equate with power.

Early on, Jep says that he aspired to be king of the socialites, a man with the power to make parties fail should he choose to do so.

Fittingly, the movie's first party is a doozy. To celebrate his 65th birthday, Jep organizes a teeming gala replete with throbbing, infectious music that seizes the revelers, including his editor (Giovanna Vignola), a dwarf who's as savvy as Jep and who can be as unsparing in her assessments of others.

Jeb may not appear anguished, but he knows he's reached an existential dead end. At one point, he says that his crowd knows how to do the best train dance in Rome. Why the best? Because it goes nowhere.

As the movie unfolds, Jep learns that the woman he first loved has died. He then begins an often wry examination of what many might regard as a wasted life. He also meets two women. Ramona (Sabrina Ferilli) is a stripper who continues to work even though she's in her 40s; Giusi Merli plays a woman many regard as a saint, an impoverished, toothless nun who sleeps on floors and who has a startling otherworldly presence.

Servillo makes a charming host; at moments when the movie feels a bit confusing, he's there to remind us that we're watching a meditation about Rome, about the city's strange juxtaposition of ancient ruins (Jep's apartment overlooks the Colosseum) and chic modern design, about the city's sensory appeal and about the sybaritic pleasures to which Jep has devoted much of his life.

No matter what else you get out of The Great Beauty, it will reward your senses with carefully chosen music (from techno pop to Henryk Gorecki), with the ravishing imagery cooked up by Sorrentino and his cinematographer Luca Bigazzi and with Serville's engagingly worldly performance.

In a way, Jep's a connoisseur of the senses. Servillo doesn't so much walk as he glides. He makes it clear that Jep wears his sophistication easily. There doesn't seem to be an ounce of strain in him.

Sometimes, I forgot about trying to make anything much out The Great Beauty, but feasted on imagery that continues even through the movie's end credits. In an age of 3-D and comic-book blockbusters, I'd almost forgotten what magnificent visual imagery can do for a movie.

The only special effects in evidence here are Sorrentino's and Bigazzi's incomparable eyes, their unsurpassed sense of composition and color. The Great Beauty is a cinematic temptation: The movie plays like a brilliant, witty conversation that's loaded with intriguing asides.

I was once on a train in Italy; the man sitting next to me asked where I was headed.
"Rome," I said.

"Ah, Roma,'' he responded, putting much color and commentary into the word. There was admiration, cynicism, respect, perhaps even a touch of world-weariness in his tone.

After watching The Great Beauty, I thought about that voice again.
"Ah, Roma," indeed.