The series continues with a strong second helping. 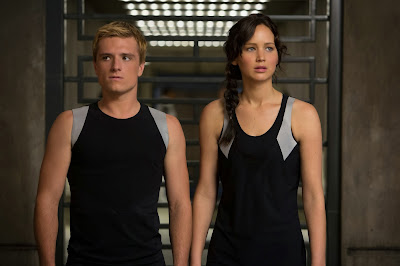 At the conclusion of The Hunger Games: Catching Fire, I felt as if I'd been watching an old-fashioned serial -- only one that had been playing for two hours and 26 minutes. Even at this excessive length, the second big-screen adaptation of novelist Suzanne Collins's popular series, left me wanting more.

Much of the credit for this goes to Jennifer Lawrence , the fine actress who gives Catching Fire its conscience and its heart.

Moreover, the movie's visual environment -- skillfully created by director Francis Lawrence and a capable effects team -- enhances what amounts to an upgraded second helping of a franchise that's gaining both momentum and seriousness as it moves toward its finale.

Lawrence (the director) has a distinct advantage over his predecessor, director Gary Ross. Because he doesn't need to establish the world in which the action takes place, Lawrence is free to advance the story, and he wastes no time belaboring the obvious: The Hunger Games that define the movie have a disturbing contemporary relevance, reality TV carried to perverse extremes.

This edition finds Jennifer Lawrence's Katniss Everdeen as haunted as she is determined: In the last installment Katniss killed to survive: She now suffers the burdens of post traumatic stress disorder and lingering guilt.

The twist in the story finds Katniss and Josh Hutcherson's Peeta thrown back into competition as part of a ploy by the evil Capitol to extinguish any flames of rebellion that might be sparking in the various districts into which the country of Panem has been divided.

This particular competition -- staged to celebrate the 75th anniversary of the Capitol's victory over an earlier rebellion -- pits previous Hunger Games winners against one another in what promises to be an even more brutal fight to the death. There's only one winner in a Hunger Games competition; i.e., one survivor.

There's a hitch in the plan, though. This time, combatants are much more likely to ally with one another because they all feel betrayed. Victories in earlier editions of the Hunger Games were supposed to guarantee the winners and their families lives of peaceful ease. The Capitol has reneged on its promise.

It doesn't take much familiarity with the Collins's novel to know that currents of rebellion flicker beneath the fascistic, authoritarian order that the Capitol ruthlessly enforces. Public floggings and arbitrary punishments makes us root for revolution.

The returning cast includes Donald Sutherland as President Snow, a man whose cunning is as thorough as his crisp enunciation. Liam Hemsworth returns as Gale, Katniss's old flame. Katniss's heart may belong to Gale, but she's forced into a phony romance with Peeta -- mostly to amuse the ever-observant powers-that-be in the Capitol. Will the sham become real?

Woody Harrelson reprises his role as Haymitch, an older former Hunger Games winner. Elizabeth Banks returns as Effie Trinket, the big-haired fashionista who presides over the public image of Katniss and Peeta. Lenny Kravitz is back as Cinna, Katniss's super-creative costumer; and Stanley Tucci again turns up as Caesar Flickerman, the host of the Hunger Games broadcast whose smile is as big as a billboard. A little of Tucci's over-the-top, parodic take on game show hosts goes a long way, even when used judiciously, as it is here.

The movie benefits from the addition of a few new characters: Plutarch Heavensbee (Philip Seymour Hoffman), a game designer and master schemer, becomes the brains behind President Snow's malignant schemes. Plutarch has been charged with designing this edition's electronically controlled Hunger Game: It's called The Quarter Quell and includes poisonous fog, vicious baboons, swooping birds and a storm surge.

Also joining the fray are Jeffrey Wright, as a technically savvy warrior, and Sam Claffin, as an arrogant combatant, who turns out to be less selfish than we initially anticipate. Jena Malone has a nice turn as a Hunger Games participant who makes no attempt to hide her fury at having been drawn back into combat.

From the outset, the movie's effects team has ample opportunity to impress -- in the sleek imperial Capitol, on speeding trains and in decaying District 12, home to Katniss and Peeta, and, of course, in the action-packed games. (Oddly, the games might be the movie's least interesting achievement.)

The movie builds to a climax that neatly sets the stage for the final chapter, Mockingjay, which is scheduled to be released in two installments next year.

Unlike some franchises, Catching Fire isn't afraid to put some breathing space between its action set pieces. And this time, the movie seems more serious about immersing us in a class-divided society in which the misfortunes of the impoverished many support the decadence of the privileged few.

Posted by Robert Denerstein at 4:45 PM

Good review Robert. Exactly what happens when a book is adapted-to-the-screen, the right way.