Spike Lee tries hand at a story that attempts to bring the shock of a South Korean movie to American multiplexes. 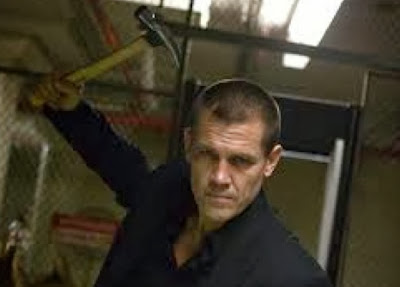 I wasn't a major fan of director Chan-Wook Park's Oldboy, but I admired its shocking audacity: Park's revenge saga featured the kind of violence that tends to delight certain genre enthusiasts. Among other things, the movie's main character ate a live octopus and extracted an adversary's teeth with a claw hammer.

I have no idea how Spike Lee's remake will play with those who are unfamiliar with the original. But for those of us who know Park's movie, watching Lee's version becomes little more than an exercise in comparative viewing.

Lee doesn't skimp on shock or violence as he brings Mark Protosevich's screenplay to life. The remake offers a mixture of new wrinkles and familiar ploys that should keep fans of the original guessing right up until the finale.

In this version, Joe (Josh Brolin) -- the main character -- is a hopelessly crude advertising executive whose offensive behavior is matched only by his alcoholic intake. After a particularly awful drunken binge, Joe awakens in what appears to be a shabby motel room. He has no idea how he got there. It eventually dawns on Joe that he's being held prisoner, although he has no idea why. He remains in this state -- being fed nothing but dumplings from Chinese takeout -- for 20 years.

While imprisoned, Joe -- whose room has a television set that mostly broadcasts advertisements for exercise equipment -- sees a newscast in which he learns that his estranged wife was murdered. His three-year-old daughter has been placed in the care of others.

Poor Joe: He's the only suspect in the crime.

When Joe's finally released, he dedicates his life to proving his innocence and wreaking vengeance on his captors. Of course, he must first find out who his captors are.

It's difficult to say more without spoilers, but it's worth knowing that Lee and Protosevich (I Am Legend) approach Park's story by offering variations on many of the same issues that concerned Park: namely perverse sex and brutal violence. Like Park, Lee gradually doles out revelations that are intended to rock Joe's already shaky world.

Lee brings an eclectic approach to casting. South Africa's Sharlto Copley (District 9) plays Joe's nemesis; Elizabeth Olsen portrays a social worker and former drug addict who tries to help Joe after his escape; and Michael Imperioli signs on as a bartender who has known Joe since the days when they both attended the same prep school.

Lee also finds a role for Samuel L. Jackson, who plays the man in charge of Joe's imprisonment. He also works in one of his trademark dolly shots lest we forget who's behind the camera.

Fans of the original will want to know that Lee replicates the hammer fight that became a signature of the original. The way Lee tweaks the story may be slightly more preposterous than the way in which Park brought it to its chasenting conclusion. The American version also has a tendency to over-explain things that remained more beneficially murky in the original.

But the main thing missing from this American version is the soulful, agonized performance of Choi Min-shik, who played the imprisoned man in Park's movie. The other actors don't compare as well, either. It's not that they give bad performances; it's more that the raw quality of the original (as difficult to take as the outré violent touches) isn't always in evidence.

What's left is a weird plot and dreary atmospherics as Lee dips into waters that reminded me not only of Park but of Canadian filmmaker David Cronenberg.

It would be wrong to deem Oldboy a total failure: I was interested in how Lee and Protosevich approached their task, but I never figured out why they wanted to take on the job in the first place.


Posted by Robert Denerstein at 2:00 PM