A professor loses her moorings 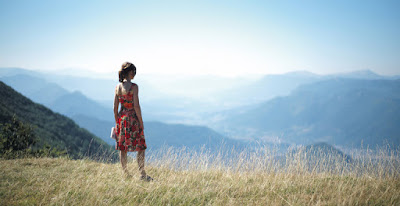 She teaches philosophy, and has a stable marriage. Her two kids may not be following in her academic footsteps, but she loves them. Her former students think fondly of her. She's written books that have been well-received by her colleagues.

So what precisely does Nathalie Chazeaux have to complain about?

Ostensibly, nothing -- aside from the deep existential questions that occupy us all and may prove a bit more vexing for students of philosophy.

But in director Mia Hansen-Love's Things to Come, Nathalie undergoes a series of life-transforming events. Her stolid husband -- also a philosophy teacher -- announces he's "met someone." He's leaving her for another woman. Nathalie's publisher says that a seminal textbook she has written has gone stale. A former student (Roman Kolinka) should be following in her footsteps, but seems more interested in dropping out of academia to make cheese in the countryside. He's still reads philosophy; it's academia that has lost its allure.

You might think that Hansen-Love has served up a French version of the woman-on-the-verge-of-nervous-breakdown scenario. You'd be wrong -- partly because Hansen-Love wisely underplays her hand and partly because of Isabelle Huppert's intriguing performance as Nathalie.

Few actresses are as good as Huppert at keeping us off guard; she doesn't tip her hand about her character's thoughts. Don't be fooled, though, her character is thinking -- perhaps all the time.

Nathalie doesn't indulge in emotional outbursts, but that doesn't mean that she isn't capable of resolve. She's firm with her ex-husband (Andrew Marcon). She refuses to maintain any part of their marital facade. Why not go to the summer house they shared for many years? Why overdramatize, he asks? She's not about to pretend that nothing has happened.

Nathalie may not overdramatize, but she certainly internalizes. And she's clearly dealing with heavy weather, including the constant demands of an aging mother (Edith Scob), a woman whose beauty once made her the center of attention. Mom can't (or won't) adjust to the moment in life when she's fading from the scene.

Don't look for Huppert to go off the rails when the whiz-kids at her publishing house insist that her books be revised to include eye-catching graphics. But that doesn't mean you won't see Nathalie judging the abject superficiality of marketing minds that threaten to turn the book business into a joke.

Hansen-Love's approach may remind you of a filmmaker such as Eric Rohmer. I say that because Things To Come isn't a film about characters who are doing momentous things; it's a film about how these characters live -- with Huppert serving as our guide.

Nathalie's world may not be unbearably painful; but it's not satisfying, either. And that's a problem she'll carry into the future, the uncertainty of an acutely intelligent woman who'll probably stumble again as her life evolves.