Where migrants land and life goes on

A documentary immerses us in life on Lampedusa, an island gateway to Europe for many who are fleeing Africa and the Middle East. 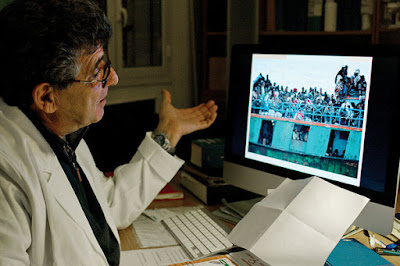 In making the documentary Fire at Sea, director Gianfranco Rosi gambled big. Rather than inundate us with a straightforward account of harrowing problems faced by the thousands of migrants who have tried to reach the Sicilian island of Lampedusa, he has created an intimate portrait of life in a place where the settled and uprooted share a strange co-existence.

Dispensing with both narration and musical accompaniment, Rosi mixes images of desperate immigrants who have dared to cross the Mediterranean with views of daily life on an island that doesn't seem to have vaulted into the 21st Century.

Title cards at the film's opening tells us that in the past 20 years, 400,000 migrants have landed on Lampedusa. An estimated 15,000 people have died attempting the crossing, often having begun their journeys in Tunisia.

If the film has a main character, the job falls to Samuele Pucillo, a 12-year-old who lives a with his fisherman father. Samuele hunts with a sling shot. He spends a day on his father's boat and gets seasick. He's treated by the local optometrist for a lazy left eye. He listens to his grandmother's stories about World War II. He struggles with reading at school.

None of this sounds amped up or italicized, but that's the point. Rosi has a fondness for quotidian detail; maybe that's why he includes a scene in which a woman smooths the coverlets of what must be the most meticulously made bed in all of Europe.

Rosi also shows us the plight of immigrants for whom Lampedusa has become a stepping stone en route to other European destinations. Some of the immigrants -- all from tormented points of departure in Africa and the Middle East -- are greeted by islanders wearing protective suits and masks. We see a rescue attempt, and also hear an alarmed voyager begging for help from a radio operator.

A late-picture sequence involving a rescue from a small, overcrowded boat opens the door to what we learn has been a typically nightmarish voyage.

To make his film, Rosi lived on Lampedusa for a year. He also served as his own camera operator, an approach that allowed him to give the film a sense of unhurried familiarity few films achieve -- whether he's observing Samuele trying to explain his shortage of breath to the local doctor, watching immigrants play soccer or recording the triumphant rap of an immigrant from Nigeria.

The doctor, by the way, seems to embody the attitude of the locals, a blend of patience and sad empathy. The residents of Lampedusa have been living with this human influx for a long time; they know the drill and have seen the heartbreak.

In a way, Rosi tries to bring the simple authenticity of Italian Neorealism to a complex 21st century issue. But Fire at Sea doesn't insult us by ending with a call to action. It's as if Rosi has told us "This is life in Lampedusa. See it. Live with it. Allow it to seep into your consciousness. Decide what to make of it."