A ruthless lobbyist takes on guns

Miss Sloane has hold of a strong topic, but squanders credibility. 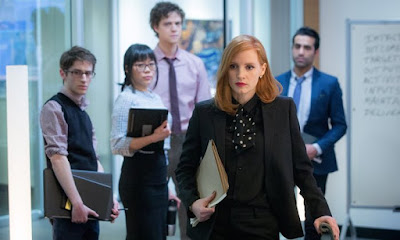 Those are some of the ingredients that could have turned Miss Sloane into a butt-kicking political drama if only the movie had been able to pass the credibility test.

The movie opens with the apparently discredited Sloane testifying before a committee led by a reproachful senator (John Lithgow) who makes little attempt to conceal his disdain for her. As she faces a volley of questions, Sloane repeatedly takes the Fifth -- until anger gets the best of her, and she tells the committee what she really thinks.

The drama, which tells its story in flashbacks from that committee hearing, centers on gun control legislation. Early on, we learn that Sloane works for a top-ranked lobbying firm where she's earned a reputation as a perpetual winner.

The head of the agency (Sam Waterston) expects Sloane to help the firm win the business of a gun advocacy group that wants her to create a program designed to sway women to its cause.

Because she believes in background checks, Sloane balks. Not only that, but she goes to work for the other side.

How busy is Liz? Sloane periodically hooks up with a male escort named Forde (Jake Lacy). We're supposed to believe that an attractive, ambitious woman is so eager to avoid compromising personal ties that she's willing to pay for sex. What? This amazingly talented lobbyist, a woman who can't be out-calculated, isn't skillful enough to play bedroom games?

Somewhere in my notes, I wrote that watching Miss Sloane was a bit like watching bad Aaron Sorkin -- or at least second-rate Sorkin.

It's hardly surprising that even when she's fighting for a righteous cause, Sloane remains ruthless. She's still willing to play dirty, in one instance throwing a subordinate (Gugu Mbatha-Raw) under the bus to boost her chances of winning.

As directed by John Madden (Shakespeare in Love, The Best Exotic Marigold Hotel), Miss Sloane suggests that something in Sloane's childhood may have helped turn her into the fastest rat in the rat race. We never learn what that might be.

Miss Sloane barrels along with a sense of faux urgency, right up until an ending that brings incredulity to a head-scratching crescendo.

Chastain is gifted enough to carry this kind of movie, but for a drama such as Miss Sloane to work, we must believe that it understands who really pulls the levers of national power.

Suffice it to say, in the political reality that dawned on Nov. 8, that may prove an uphill battle for even the most intrepid of screenwriters.