Ryan Gosling and Emma Stone star in an attempt to breathe new life into the Hollywood musical. 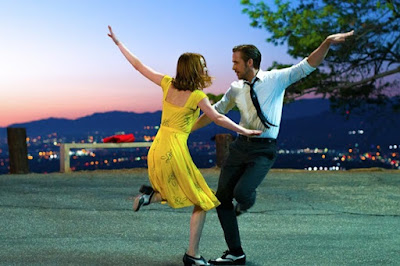 I liked it, OK? Now, let me tell you why the much-praised La La Land didn't totally lift my spirits, change my mood or otherwise transport me to heights heretofore unattained in the history of human movie watching. And, no, I'm not talking about some post-election funk that prohibits me from enjoying anything.

For me La La Land is a bit of an oddity, a movie I enjoyed (some of it immensely) and also quibbled with (often).

Director Damien Chazelle (Whiplash) opens the movie with a dance number staged on an LA freeway exit that sets a snappy pace that defines the movie in its earliest going. Scenes feel carbonated, as if they're about to bubble off the screen.

The single-shot camera work of the movie's opening proves fun in a razzle-dazzle sort of way, but if you look at other elements (the music and the dancing), you may be slightly less impressed. La La Land feasts on candy-colored imagery and an unashamed reckoning with its musical predecessors.

La La Land centers on a romance between aspiring artists -- one a jazz-obsessed pianist (Ryan Gosling), the other an actress (Emma Stone) who has yet to make her mark in Hollywood.

Watching Gosling and Stone do a Rogers/Astaire-like number on a deserted street overlooking the city's lights proves a bit of a strain. They're both trying their best, but I've seen Fred Astaire and ... well ... you know how the rest of the sentence goes.

Of the two stars, Gosling seems the least likely to turn up in a musical. He's playing a character who dreams of restoring a jazz club in Los Angeles, and he's written a song for piano that becomes one of the movie's major motifs. Sorry to say, the tune sounds trite when compared to Gosling's character's purported heroes: Bird, Coltrane, et. al.

Eventually, Gosling's Sebastian is presented with the opportunity to join a successful band led by former pal Keith (John Legend), a musician who embraces a youthful audience and thinks that Sebastian's devotion to jazz might be a bit pointless.

By this time, Gosling's Sebastian and Stone's Mia are a couple; she urges him to join Keith's touring show, but in the end, regrets having encouraged him. She thinks Sebastian has sold out his art, and betrayed his avidity. Who's left to defend the purity of jazz?

Stone's Mia faces her own struggle. She finds herself humiliated at audition after audition, familiar scenes handled with aplomb by Chazelle. Sebastian encourages Mia to write a play, and stage it as a one-woman show. She does. No one comes. She heads back to her home in Nevada, but eventually achieves her dream, and becomes a star.

Will the romance between Mia and Sebastian survive all this career angst?

While pondering that question, you'll find trace elements of Stanley Donen, Gene Kelly, Vincent Minnelli and Jacques Demy. But even if you don't catch the references, you'll get the feeling that Chazelle wants to meld old-fashioned movie magic with an upbeat sensibility that can play to contemporary audiences.

The stars of the movie are production designer David Wasco, art director Austin Gorg and cinematographer Linus Sandgren, whose work affords considerable pleasure in quiet sequences in which Stone's Mia simply walks down a dimly lit street or in a fantasy sequence set at Los Angeles's Griffith Observatory, which you'll recognize as a centerpiece location in Nicholas Rey's Rebel Without a Cause.

Chazelle uses the observatory's planetarium for the movie's most fanciful and charming sequence, which offers a helping of gossamer enchantment that can't help but make you smile.

Don't be surprised if Stone wins the best actress Oscar for her work here. To the extent that the movie has a true beating heart, it emanates from Stone, who has been given a showcase musical number -- a song that she pulls off with more conviction than vocal talent.

The movie's bittersweet ending isn't entirely satisfying, but we have La La Land, and it's possible to like it without totally surrendering to all of its carefully concocted charms.