Digging up minefields in Denmark

Land of Mine tells the story of a tough Danish sergeant who leads a small group of German prisoners in a mine-clearing operation. 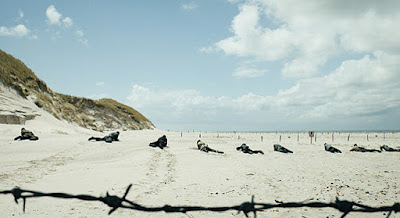 Land of Mine, Denmark's entry in the recent Oscar race for best foreign-language film,* derives from the meeting of two historical facts. As Germany began to exhaust its resources toward the end of World War II, German soldiers tended to become younger and younger. Secondly, once the war ended, Denmark forced a variety of German soldiers, stragglers and prisoners, to clear the country's beachheads of mines, a task that resulted in death for many Germans.

Director Martin Zandvliet's first feature generates plenty of tension, much of it resulting from watching German attempts to defuse mines along an isolated strip of Danish beach.

Had that been the movie's only tension, Land of Mine might have degenerated into a white-knuckle, cinematic exercise. But Land of Mine has more in mind; it's also about the way the desire for revenge, prompted by justifiable anger, can distort people's values.

In the case of the Danish sergeant who takes charge of 12 German prisoners, the taste for vengeance is almost palpable: Sgt. Carl Rasmussen (Roland Moller) brims with the anger that stems from the five years in which the Germans occupied his home country. At the movie's outset, Rasmussen brutally beats a German prisoner, urging this already vanquished soldier to get out of Denmark.

As a Danish soldier, Rasmussen hardly needs reminding about German brutality, even though his nation fared better than most occupied countries during the war.

As his bomb-clearing assignment progresses, Rasmussen begins to develop some sympathy for his German charges, who are housed in a shack on the beach and mostly deprived of food. Rasmussen's empathy stems from the fact that these "soldiers" are really boys -- or at the most young men. Moreover, they're not shown to have any political views. They all want to return home, and begin picking up the pieces of their lives.

The impression we get from the movie is that these Germans, some of whom may have been toddlers when Hitler began his rise to power, are also victims, much in the way Rasmussen comes to see them. Rasmussen shifts his hard-line views despite the fact that his commanding officer (Mikkel Boe Folsgaard) believes that no punishment of German soldiers should be viewed as too severe.

Why care about these young soldiers? Did Germany care about the people of Denmark? Or any of the other countries it occupied, for that matter? And wasn't it German soldiers who planted the mines on the beach in the first place, part of a misguided expectation about where Allied forces would land?

Clearly, we're not supposed to agree with Folsgaard's emotionally hardened character: The point, I suppose, is that war can wring the feelings out of just about anyone. If there's a moral here, it might be this: Sometimes a simple recognition of humanity ought to transcend the color of uniforms, particularly after the violence stops.

Whatever its attempts at deep thematic digging, it's the interaction between Rasmussen and his ragtag crew of mine-defusers that keeps the movie percolating, and, as you'll recall from Zero Dark Thirty, disarming bombs remains a great source of heightened tension -- both on-screen and off.

But mines aren't all that need disarming once the fighting concludes. Land of Mines seems to want to tell us that when a war ends, another deeply buried mine also must be defused: hatred of the other.

*This year's winner, the Iranian film, The Salesman.