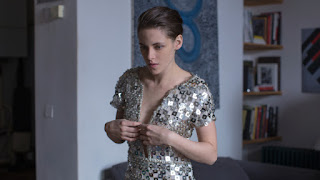 Director Olivier Assayas worked with Kristen Stewart in the well-received Clouds of Sils Maria (2014), the story of a young woman working as a personal assistant to a famous actress (Juliette Binoche). Now, Assayas has reunited with Stewart for Personal Shopper, a movie that does its best to defy description.

Assayas tries to combine various genre elements, most notably those of a ghost story, those of a philosophical thriller and those pertaining to the portrait of a grief-stricken character at loose ends.

Stewart's Maureen is haunted by grief after the death of her twin brother, Lewis, a young man with whom she shared a heart defect and with whom she made a pact. Brother and sister agreed that whoever died first would contact the other from the great beyond. We're told that both Maureen and her brother were mediums.

Stewart's Maureen lives in Paris where she works as a personal shopper for an apparently famous model (Nora von Waldstatten). Maureen, who doesn't seem to fit into Paris or perhaps into any known surroundings, travels around the city on her motor scooter. She's looking for items that might please her mostly unappreciative boss.

Maureen also spends time at the house where her brother passed away. She encounters various noises, but not getting a clear message from the next world, although Assays shows us a computer generated shimmer that we assume is the late Lewis's ghost.

Once in a while, Maureen Skypes with her boyfriend (Ty Olwin), a young man who's working in cybersecurity in London.

More importantly, she begins receiving text messages (well-handled by Assayas over the course of 20 minutes) from an unidentified man who seems to know her every move. The ghost? A stalker? Someone menacing? Someone helpful?

Stewart plays an unhappy 27-year-old woman of frustratingly spare expression. That makes her a perfect match for Assayas's maddeningly spare approach. He's big on showing us glossy interiors, but doesn't seem all that interested in human interiors.

Say this, though, Stewart manages to look entirely of the moment even when her character is bored.

Assayas steadfastly refuses to define his movie, which isn't made any clearer by the addition of a brutal murder. You can take all this as irritatingly or provocatively French, depending on your taste.

I don't mind ambiguity, but there's a difference between ambiguity and vagueness. For me, Personal Shopper blurred the line. Put another way: Personal Shopper feels arty and pretentious, but left me unsure about what its pretensions even were.