Poles who helped save Jews

Jessica Chastain starts in The Zookeeper's Wife, the latest big-screen drama to deal with the Holocaust. 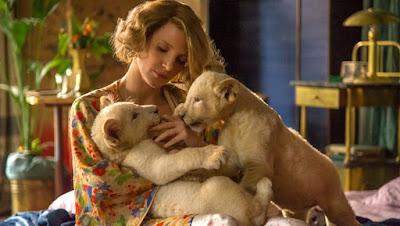 Israel has awarded the title "Righteous Among the Nations" to more than 26,000 Gentiles, brave souls who helped save Jews during the Holocaust. To date, more Poles -- 6,620 in all -- have received this honor than individuals from any other nation, a statistic partly explained by the fact that Poland became the epicenter of Nazi efforts to annihilate Europe's Jews. Beyond that, Poland had the largest pre-war Jewish population of any country in Europe, numbering 3.5 million.

Among those honored by Israel are the characters in The Zookeeper's Wife, a movie based on a true story that was recounted in a best-selling book by author Diane Ackerman. There's an inherent pitfall in such heroic Holocaust stories, the most notable being that they can be seen as having defining power concerning a historical crime that never should be seen through a life-affirming lens. That's why overall context is so important when it comes to Holocaust dramas.

Having said that, it's also true that stories about those who risked their lives to save Jews deserve to be told, and few are more intriguing than those recounted in The Zookeeper's Wife.

Prior to the war, Warsaw's zoo was run by Antonina and Jan Zabinski. During the war, the Zabinskis managed to hide 300 Polish Jews at the zoo, using the zoo's facilities to conceal them from the Germans.

As a cover for their efforts, the Zabinskis turned the zoo into a pig farm. They convinced the Nazis that they could raise pigs to feed German soldiers. They would nourish the pigs with scraps collected from the Warsaw Ghetto. Jan made trips to the ghetto, where he covered Jews in garbage and smuggled them to safety.

For reasons that may have more to do with international marketing than with historical authenticity, everyone in Zookeeper's Wife speaks English, employing a variety of accents with Eastern European flavor, an approach that already compromises the material.

It should also be noted that Chastain is a wonderful actress, but there are many fine Polish actresses who easily could have tackled this material.

Director Niki Caro (Whale Rider) opens the movie with an idyllic passage in which we learn that the zoo functions as Antonina's Edenic paradise. She makes her morning rounds on a bicycle while a baby camel trots happily behind her. A couple of more clicks in the direction of cuteness and we'd be talking Dr. Dolittle.

It doesn't take long for the Germans to begin bombing the zoo as part of its invasion of Warsaw. Animals die, and Antonina, Jan and their young son (Timothy Radford) are terrorized.

Daniel Bruhl plays a Nazi zoologist who arranges for some of the zoo's best animals to be shipped to Germany for genetic experimentation. German soldiers shoot the rest.

Bruhl's character flirts with Antonina, who tries to keep his interest alive while warding off his most flagrant advances; she knows that this zoologist -- sort of an animal-oriented Mengele -- must think of her as an ally if she's going to continue her life-saving efforts.

Caro's treatment of ghetto life and of the Polish home army remains sketchy and not entirely satisfying.

The script has been tailored to showcase Chastain, who gives a credible performance. Portraying the character who does most of the heavy lifting when it comes to saving Jews, Heldenbergh mostly is asked to look grave. Bruhl's SS zoologist manages a neat trick: He's bland and menacing at the same time.

The Jews in the story become little more than props used to support Antonina's gentle heroism, although the story of a Jewish girl who's raped by German soldiers proves harrowing.

In all, The Zookeeper's Wife is a medium-grade drama that has been given the look and feel of a prestige offering.

If you want to see a remarkably shaded and far more agonizing story about the interaction between Poles and Jews during the war, try Agnieszka Holland's In Darkness, a movie that offers nuances and hard-core realities that Caro's effort doesn't begin to approach.