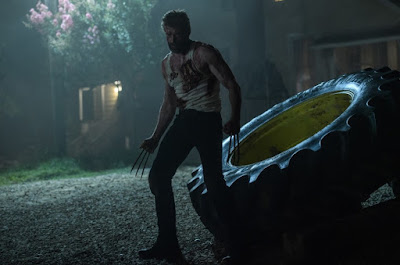 For reviewers, the threat of overstatement always looms. Safe to say, though, that Logan -- which appears to be the final installment of the Wolverine series -- is one of the darkest comic book movies yet, a plunge into personal crisis for a mutant who has grown weary of clawing his way through endless opposition.

Existential fatigue aside, Hugh Jackman's Wolverine still creates enough gruesome sights to make more squeamish audience members wince. Still, both literally and metaphorically, a depressed and nearly forlorn Wolverine has grown sick of himself and of the world.

I wonder, too, whether this addition to the Marvel Comics' inexhaustible repertoire isn't itself a kind of death wish for the exhausted comic-book genre -- or at least as close as a big-ticket movie can get to one. Inescapable whiffs of mortality and decay outweigh any suggestion that a new generation of mutants will continue the good fight.

Whatever his objectives, director James Mangold (Wolverine, 3:10 to Yuma and Walk the Line) boldly examines the gulf between comic book reality and life. In the world of comic books, superheroes seldom die, and even if they do, they somehow manage to resurrect themselves for the next installment. Not so in world Logan currently inhabits.

Bearded and looking as if he's been given a terminal diagnosis, Jackman introduces us to a Wolverine who's drowning his sorrows in alcohol and who, in the movie's opening, only reluctantly takes on a group of thugs who are vandalizing the limo that he's driving while trying to live out his days on society's frayed edge.

Mangold, who contributed to the screenplay, begins his story in 2029, a time when the fabled X-men have been scattered, their ranks depleted. Despite his best efforts to remain isolated, Wolverine finds himself looking after 11-year-old Laura (Dafne Keen), a girl who has been engineered to battle foes by a shady operation based in Mexico and run by the evil Dr. Zander Rice (Richard E. Grant).

OK, the desire to weaponize mutants isn't exactly fresh, but it's serviceable enough to keep Logan on its grim path.

Laura escaped Mexico in the company of her nurse (Elizabeth Rodriguez), a woman who wants to save the girl from those who would satisfy their lethal ambitions by turning her into a killing machine, a task for which she's been given Wolverine-like, retractable claws.

Laura believes that she can find refuge with other mutants in North Dakota, where she'll other mutants supposedly live. A skeptical Wolverine accompanies on her journey.

Perhaps drawing inspiration from the ever-growing slate of dystopian movies, Mangold creates a shabby world that's not immune from the ravages of aging, punctuating the dark mood with well-conceived action set pieces that don't skimp on vividly displayed brutality. Being clawed by Wolverine does not lead to pretty outcomes.

Wolverine and Laura are joined on their trek by Charles Xavier (Patrick Stewart), who has reached the age of 90 and who suffers from fits that, quite literally, shake the world around him. If he fails to take his medication, Charles convulses, creating tremors that rival a small earthquake.

When Logan's out trying to earn money, an embittered Caliban (Stephen Merchant), a mutant with tracking powers, watches over Charles who's living in a fallen water tower on an abandoned Mexican farm. It's Wolverine's job to supply Charles with the expensive medication that controls his seizures.

Jackman and Stewart play off each other nicely, and Keen more than holds her own as a wild child whose temper never should be aroused.

The movie's conclusion doesn't quite match its buildup, but Jackman and Mangold catch you up in the Logan's forbidding moods, making the movie one of the most gripping Marvel-inspired movies yet.