A piercing look at a corrupt society

In director Cristian Mungiu's Graduation, the moral fiber of characters is tested. Most don't pass. 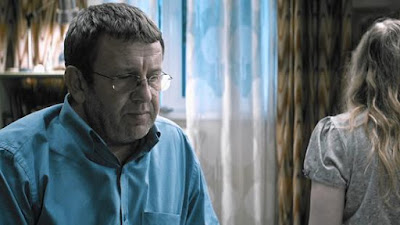 You know the drill. Two people covers. Fearful that attention spans immediately will erode, filmmakers employ a variety of strategies. The characters might talk as they walk. Maybe the camera shifts between close-ups of the speaker and the listener. Or perhaps we hear the conversation in voice over as the camera takes us to a place the filmmakers believe will advance the story.

There's nothing wrong with any of these approaches, but Romanian director Cristian Mungiu (4 Months, 3 Weeks and 2 Days) has little use for them. Instead, he often places both speakers in front of the camera and allows them to converse in a medium shot that would drive many directors crazy with impatience.

Mungiu's style works because he allows life to unfold before the camera as if he's doing nothing whatsoever to manipulate it. He enables us to live with his characters, experience what they experience and understand the society that surrounds them.

Mungiu's new film, Graduation, evolves from a simple premise that conceals a multitude of complications. Romeo Aldea (Adrian Titieni), a physician, angles to help his teen-age daughter (Maria Dragus) gain admission to prestigious Cambridge University. Romeo approaches this goal with more than the usual parental anxiety because he wants to open a door for Dragus's Eliza to leave a society steeped in corruption.

En route to school one day, Eliza is attacked. The assault shakes her, interfering with her ability to take her exams. The doctor, an ethical man, suddenly must decide whether he should plunge into the web of corruption that will be required to give his daughter an advantage in the testing.

Mungiu further complicates the life of Titieni's Romeo. He has a wife (Lia Bugnar) with whom he doesn't seem to have gotten along for years and a mistress (Malina Manovici) who has a young son. She becomes pregnant with Romeo's child.

Fortunately for audiences, Mungiu doesn't make films that are strident in their condemnation of those struggling in post-Ceausescu Romania. The corruption we see takes place in an atmosphere where pretty much everyone understands how the get-ahead game is played.

The police chief (Vlad Ivanov) is one of Romeo's friends; the doctor doesn't hesitate to go to him for help. The police chief advises Romeo to discuss the matter of his daughter's exams with one of the town's officials (Petre Ciubotaru), a man who wants to be bumped up the waiting list for a liver transplant. Help me; I'll help you. That's the way of things.

None of these people come across as evil, and we even develop sympathy for the ailing town official, who's obviously fearful of dying and perhaps dimly aware that he won't be able to finagle his way out of his own mortality.

Those familiar with Mungiu's work may place Graduation a notch lower than 4 Months, 3 Weeks and 2 Days, a 2007 drama about a young woman trying to obtain an abortion in Romania during the 1980s. But that doesn't mean Graduation isn't worth seeing.

Every scene reveals new wrinkles of character and, equally important, of the society in which these characters function. Moreover, Titieni's performance is a wonder. He appears in nearly every frame and creates a character who has abandoned any belief that Romania will reform itself. He tries to hang on to his own integrity and ultimately must face the most difficult of problems. How much ethical compromise justifies a result that most would agree is desirable?

Thick and heavyset, Romeo carries his weight like a burden. It's not just about a few extra pounds. He's weighed down by a society in which hope too often surrenders to desperation.