What to say to a dying friend?

A Spanish drama about an actor facing his final curtain -- and his dog. 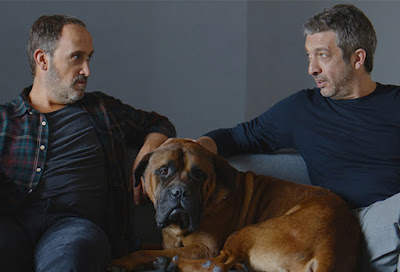 Julian has a plateful of what, these days, we're fond of calling issues: Topping the list is Julian's terminal lung cancer, but that's not the only problem Julian faces. He must come to terms with a life that has included a failed marriage, a troubled relationship with his grown son, and bad behavior toward friends.

Moreover, Julian must decide what to do with his most trusted companion, a dog named Truman, a bullmastiff that seems to move through the movie with something akin to exhausted resignation.

Though named for Julian's trusted dog, Truman isn't exactly a dog movie. The movie's precipitating event occurs when Julian's best friend decides to leave his home in Canada to pay a four-day visit to his lifelong pal, who lives in Madrid. A reluctant Tomas shows up without telling Julian that he's coming. What does one say to a dying friend, anyway? And how much will Tomas be forced to confront his own mortality?

Director Cesc Gay easily could have made Truman into a three-hankie tearjerker. Another choice would have been to give the movie a sorrowful tone as we're exposed to the relationship of two friends who've known each other since childhood. Gay takes neither route, opting instead for an approach that allows the actors -- Argentine actor Ricard Darin (as Julian) and Spanish actor Javier Camara (as Tomas) -- to create a relationship that is at once comfortable and challenging.

It doesn't take long for us to learn that Julian has decided he's done with chemotherapy, a course of treatment that gave him a brief respite from a cancer that since has returned. Julian's sister Paula (Delores Fonzi) can't accept Julian's decision. Tomas, on the other hand, realizes that Julian's choice makes sense. Why prolong a battle that can't be won?

There's a bit of an odd-couple undertone to the friendship between the two men. Julian has lived a life that has made room for impulse. Tomas, a married science professor, seldom follows his whims.

Still, he wants to be available for his pal and accompanies him to a funeral home where Julian arranges for his departure. He even indulges Julian by paying for an impromptu trip to Amsterdam so that Julian can visit his son, who's studying abroad. Among other things, Julian hasn't a Euro to his name.

Julian visits his doctor, but Gay wisely avoids turning Truman into a medical drama, devoting more time to Julian's efforts to find a home for his aging dog and to reconcile with himself before it's too late. The dog's destiny isn't difficult to predict, but what really makes this movie satisfying is Gay's focus on two men on the cusp of the third act of their lives, an act that Julian will not live to play out.

If there's a conclusion to be drawn here, it might go something like this: Even in dire situations, we remain ourselves, bumbling through as best we can.