A ridiculous story, lots of action and decreasing amounts of fun. 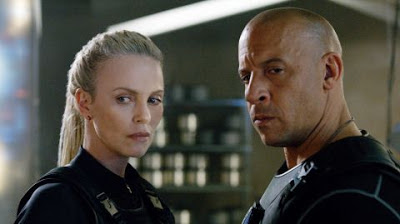 What started in 2001 as an amped-up and gritty look at the street racing subculture has spawned a total of sevens sequels. Overall, the Fast and Furious movies have done a good job of satisfying action-hungry audiences while also taking on the job of turning an ethnically diverse cast into a popular rogue family.

In its latest incarnation -- dubbed The Fate of the Furious -- the franchise finally falls prey to a 21st Century disease: overstated bloat. Not only that, the movie has lost much of its original flavor, resorting instead to a ludicrous story in which the Furious gang becomes a kind of Mission Impossible team that must thwart the ambitions of a super villain named Cipher (Charlize Theron). Cipher wants to go nuclear and take half the planet with her.

Vin Diesel's Dominic Toretto faces what passes in such movies as a moral crisis, and the movie drags out familiar characters Jason Statham's Deckard, Dwayne Johnson's Hobbs and Kurt Russell's Mr. Nobody. A hodgepodge of a script mixes and matches characters as the ruthless Cipher coerces Dom into working against his old team.

The movie begins with Dom and Letty (Michelle Rodriguez) honeymooning in Havana. With Latin beauties allowing their rumps to protrude from skimpy short shorts, a street race develops, really the last time the movie takes a serious bow toward its revved-up roots.

Director F. Gary Gray increasingly yields to the temptation of producing a clangorous noise-machine with lots of computer-generated effects, the most notable occurring when hundreds of cars tumble headlong out of a parking garage as the result of a major hacking that takes control of their computer systems.

By the end, the movie introduces a gargantuan submarine that threatens the car-crazed team. And, of course, many "hot" cars race by, although they all speed so quickly, it's difficult to admire them.

Some of the regulars get short shrift, particularly Tyrese Gibson and Ludacris, who banter with one another in limited but typical fashion. Nathalie Emmanuel portrays the group's tech genius.

A screenplay by Chris Morgan and Gary Scott Thompson includes the kind of macho lines that are supposed to be repeated outside of the theater but most of them prove ham-handed. At one point, Diesel's Dom says that the mad genius Cipher should be wary about taking her foot off the tiger's neck; i.e., him. I suppose that's the movie's idea of sage advice.

Second best thing: Statham bringing a bit of winking humor to his role as an assassin.

OK, I'm speaking only for myself here. It should be noted that this installment surely will rock the box office, that two more movies are slated and that, by now, audiences have learned to accept the preposterous and even to love it.

Once a bona fide movie, the real fate of the series is to have become a highly calculated mix of muscle, mayhem, faux menace and canned sentiment. For me, there's more noise than fun in this edition.