When a search becomes a destiny

The Lost City of Z brings a real sense of adventure to the screen. 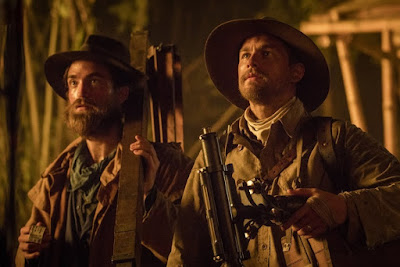 These days, the movies give us lots of synthetic adventure, including gargantuan comic-book creations for a generation of couch potatoes. It's been a while since anyone tried to serve up any real adventure. Credit director James Gray with doing just that in The Lost City of Z, the amazing story of a 20th Century explorer who journeyed deep into the Amazon jungle in search of an ancient city he dubbed "Z" and which others called El Dorado.

Percy Fawcett (Charlie Hunnam) was a British army officer who was sent to Latin America to help chart the border between Brazil and Peru. During his mapping expedition, Fawcett became convinced that he had found archeological evidence of a lost civilization that was far more advanced than anyone believed possible. European prejudice against Latin America's non-white indigenous populations preferred to see savages, not innovators.

Basing his movie on David Grann's 2009 non-fiction bestseller, Gray tells a story that shifts between England and the Amazon -- with a brief stop for some compelling war footage. Fawcett served as an officer in World War I; he was wounded during a vicious trench battle.

Populated with stuffed-shirt Brits, Amazonian tribesman, and Fawcett's loyal crew, the movie proves a stirring adventure that opts for credible realism rather than over-inflated drama.

Joining Hunnam -- quietly fierce in his commitment to finding the lost city -- is a nearly unrecognizable Robert Pattinson, who plays Henry Costin, one of Fawcett's crew. On his last expedition to the jungle, Fawcett also was accompanied by his son Jack (Tom Holland). A fine Sienna Miller portrays Fawcett's wife, a woman who wanted to participate in an Amazonian mission but wound up staying home. She cared for the couple's three children and endured a life of committed loneliness. She supported her husband's dreams.

At one point, tension erupts between Fawcett and arctic explorer James Murray (Angus Macfadyen), a man who initially supports the search for the lost city but who becomes a liability when he faces the jungle's heat and hardships.

Gray (We Own the Night, Two Lovers and The Immigrant) never before has worked on such a large scale. With support from cinematographer Darius Khondji, Gray gives the jungle sequences vigor and excitement that surpasses the scenes in England, a location to which the movie periodically returns.

I have to admit, though, at times I found myself yearning for a more rapturous approach to the movie's imagery. Maybe that's more my problem than the movie's. The British interludes tend to disrupt the adventure but that may be the point. We share Fawcett's impatience about returning to the jungle.

When Fawcett encounters an opera company in the middle of the jungle, viewers may be reminded of Werner Herzog's Fitzcarraldo, another Amazon-based movie about doomed obsession.

But Hunnam (Pacific Rim and Crimson Peak) makes an interesting choice: His Fawcett is not a man of febrile passions; he's a man of mettle, and he approaches adventure as a kind of solemn duty. It's his reason for being.

Fawcett eventually loses his heart to the jungle. The jungle, however, isn't the most accommodating of lovers, a reality that underlies the movie's best sequences: Arrows of tribesman raining down on the explorers' raft, an encounter with head hunters and the crew caught in torrents of onrushing water.

At one point, Miller delivers the line that underscores Fawcett's ambition and perhaps the movie's, as well. She cites Robert Browning's poem, Andrea del Sarto, "Ah, but a man's reach should exceed his grasp or what's a heaven for?"

Despite references to Britain's imperial racism and slavery, I'm not sure that Gray attains the thematic heights that a film such as this could have reached. But his grasp proves strong: As the story of a man who consistently risked his life in search of a city only he believes existed, Lost City serves up more genuine excitement than most of its artificially inflated competitors.