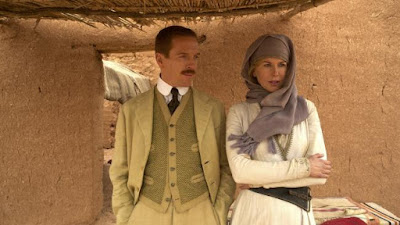 Werner Herzog isn't David Lean, and Nicole Kidman is no Peter O'Toole. I don't mean that as a slam on either Herzog or Kidman, the talented director and fine actress who have teamed for Queen of the Desert, an historical epic about Gertrude Lowthian Bell. Bell, a woman who probably will be unknown to most audiences, was a writer and adventurer who helped Winston Churchill draw the lines that carved up the Ottoman Empire after World War I.

Herzog fans immediately will be struck by the movie's surprisingly conventional style, which (alas) relies heavily on images of Kidman riding camels, on two somewhat listless romances and on the less-than-exciting intricacies of tribal politics among the Arab populations of the empire once controlled by the Turks.

A miscast James Franco portrays Henry Cadogan, Bell's first love. As he whispers his way through a British accent, it's difficult to take Franco seriously. Robert Pattinson, who shows up as T.E. Lawrence at least uses his crooked half-smile to suggest Lawrence's mischievousness.

Damian Lewis plays the third man in Belle's life, Maj. Charles Doughty-Wylie; Bell writes to Doughty-Wylie as she wanders across the desert. Periodically, we hear Kidman reading these letters in hushed tones.

Kidman captures Bell's courage, her confusion when it comes to romance and her determination not to be limited by gender. But Herzog relies on far too many glamor shots of Kidman, who manages to look beautiful even in extreme circumstances of desert heat and dust, not to mention the threat of hostile Arabs, most of whom ultimately are charmed by Bell's tenacity.

Herzog can't be accused of skimping on scenery; many of the desert images are steeped in grandeur, but the movie's swelling musical score feels like something lifted from another era.

Bell supposedly drew up the boundaries of modern Iraq, a skill that may have inspired Herzog to use on-screen maps to follow Bell's progress around the region, an old-fashioned technique that he presents without any trace of irony. Same goes for some of the cornball dialogue in which Bell talks about giving her heart to the desert.

Aside from telling us that Bell -- one of the first women to attend Oxford -- was an early example of feminine assertion, it's not exactly clear what Herzog hoped to say. Such is the price of reigning in idiosyncrasy: Herzog seldom has made a movie this sparkless and generic in its feel.