Yes, it's got some heart, but Bumblebee still has one foot -- or at least a couple of toes -- in the Transformers junkyard. 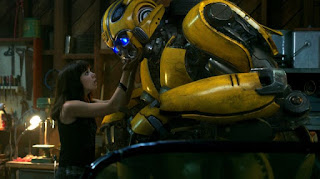 We've seen movies about girls and dogs and girls and horses. Now, we've got one about a girl and her lovable robot companion. The distinguishing factor: the robot companion -- actually a robotic life form -- is an Autobot that landed on Earth from the planet Cybertron. This particular Autobot is supposed to protect people while hiding from the evil Decepticons, robots who want to destroy all of Autobot civilization.

If you know what I'm talking about, you're already familiar with the Transformers movies, noise fests staged with ear-splitting competence by the director and action king Michael Bay.

The time, Travis Knight ( the animated Kubo and the Two Strings) takes over the directing chores turning Bumblebee into an origins story that explains how the Autobots arrived on Earth.

More importantly, screenwriter Christina Hodson establishes an emotional connection between an alienated teenager (Hailee Steinfeld) and the Autobot, a robot she finds in a junkyard disguised as a beat-up, yellow VW Beetle. Before being dubbed Bumblebee by Hailee's Charlie, the Autobot is known as B-127. He's in bad shape having been deprived of his voice and his memory in an opening-picture battle with Decepticons.

Set in 1987, the movie makes use of '80s music and follows a familiar arc in which the US military -- under the command of a gung-ho soldier played by John Cena -- predictably picks the wrong side in the fight between Autobots and Decepticons.

Amid additional '80s bric-a-brac -- from an image of Judd Nelson in The Breakfast Club to VHS tapes -- Charlie emerges as an outsider with skills: She knows how to work on cars, is upset about the recent death of her father and in more or less constant argument with her mother (Pamela Adlon).

Aside from Bumblebee, Charlie's only real friend is the kid next door (Jorge David Lendeborg Jr).

Scenes in which Charlie and a frightened Bumblebee -- the sweetest hunk of metal yet to find its way into a movie -- form their bond are well done and Steinfeld gives the movie a strong female center, but I don't want to get too excited about a movie that feels as if it's trying to further lower the age of Transformer fans while giving new life to a series that simply won't go away.