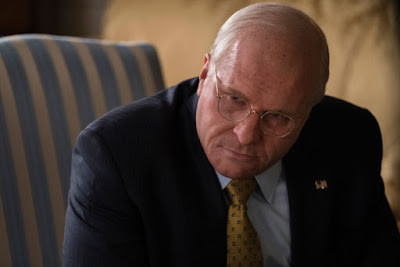 Regarded by many as the insidious power behind George Bush's empty presidential throne, Dick Cheney represents one of the strangest of political anomalies: Throughout his career, Cheney occupied a variety of power positions without ever revealing anything resembling an intriguing personality.

In excoriating Cheney, Vice, introduces us to an empty vessel of a man who tried (and mostly succeeded) at filling himself with power, either being near it or having it himself. It's a thesis of sorts, but Vice is too busy being clever to get much beyond that. At times, I wondered if the movie weren't more about its own comically rueful tone than it is about Dick Cheney.

Director Adam McKay delivers a free-wheeling, but not entirely fresh satirical indictment of Cheney and, only by inference, of many of the Neocons who supported similar positions.

McKay (The Big Short) leaves no doubt about where the movie stands. Vice opens with a howlingly drunk Cheney, as a young man, being pulled over by the cops. McKay then jumps to 9/11 as the vice president bypasses the president and gives the Defense Department authorization to shoot down any plane deemed a threat. This is followed by a quick view of real footage depicting a beleaguered America that would have fit nicely into a Michael Moore documentary.

The approach seems clear: Pieces of Cheney's career will be juxtaposed in ways that create a dizzying mosaic of bold strokes and blunt observations. Some work; some don't.

Still, audiences may want to see Vice for Christian Bale's impressive disappearing act of a performance as Cheney or for Sam Rockwell's amusing turn as an eager George Bush or for Steve Carrel's unashamedly conniving Donald Rumsfeld or for Amy Adam's no-nonsense portrayal of Lynne Cheney, the woman who evidently launched Cheney's career. She insisted that Cheney, then her fiancee, shed his wastrel ways after getting kicked out of Yale.

In his post-Yale days of the early '60s, Cheney had been spending his time in his home state of Wyoming working as a telephone lineman. When he got his second DWI, an embarrassed Lynne laid down the law; shape up or she'd find a more suitable partner. Cheney began to straighten himself out.

McKay's wild -- some might say "scattered" -- approach worked well in The Big Short, but it's overdone here with the movie racing through Cheney's resume: a stint as an intern to then-congressman Rumsfeld, a turn as Gerald Ford's Chief of Staff, 10 years in the House of Representatives, service as Secretary of Defense and, of course, an eight-year run as George W. Bush's vice president.

According to the movie, when Cheney took the vice presidential job he was determined to run the show. Desperate to have the more experienced Cheney as a running mate, Bush agreed to allow Cheney to take over the burden of matters such as foreign affairs and the military.

Vice takes a scalding -- and many will say appropriate -- view of Cheney's vice presidential activities, which include maneuvering the country into the Iraq war, justifying torture and ... well ... the list is long and, at times, as messy as McKay's movie.

McKay seems to have adopted a more-is-more approach to the material. At one point, Alfred Molina shows up as a waiter at a Washington restaurant who recites the menu, which for comic purposes has been turned into a checklist of Cheneyesque ideas. How about some "enhanced interrogation?" Care for some Guantanamo Bay?

The movie also features voice-over narration by Jesse Plemons and a last-minute reveal about why Plemons’ character is narrating the movie. At times, the narration makes it seem as if the movie is being read to us.

A set of fake end-credits rolls at a time when, or so the movie fantasizes, Cheney could have retired from public life in order to protect his gay daughter Mary (Alison Pill) from unwanted scrutiny. Fantasy, yes, but the closest the movie comes to saying anything positive about Cheney involves its depiction of his supportive relationship with Mary. Cheney tries his best to stand by her, although expedience eventually wins out.

You'll probably see Bale's name on the short list for a best-actor Oscar. Prosthetics and weight gain help, but he has captured Cheney's incipient smile, his understated venality and the matter-of-fact attitude he seemed to bring to even the most outrageous suggestions. He was a big believer in the unitary executive theory that concentrated power in the president's hands and minimized the need for any balance of power. The idea seemed to come to its fullest fruition after 9/11, the point at which the movie begins to bog down in expositional chores.

What's missing from all of this? New insight into Cheney, a politician whose career was punctuated by heart problems that become more prominent in the latter part of the movie.

Vice tells Cheney's story and, by extension examines what can be seen as an on-going deterioration of American political life. But the movie's dramatic potential is undercut by its view of Cheney as a political hollow man driven only by ambition and a thirst for power: He's pretty much the same guy from start to finish.

There's entertainment in McKay's movie and a variety of sharp-edged comic performances, but by the end, you may find yourself vainly waiting for McKay to pull the thematic string that unifies his jigsaw of a movie and keeps Vice from falling onto the side of the ledger where disappointments are recorded.