Silly fun -- but only for a while

Jason Momoa plays Aquaman with ease, but the movie is overstuffed and too long to sustain the enjoyment. 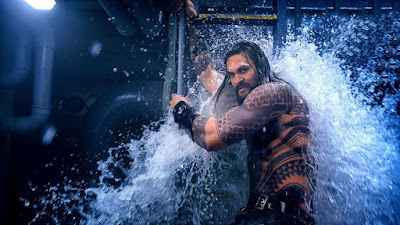 For perhaps a quarter of its length, Aquaman proves enjoyably silly, but -- for me at least -- enjoyably silly eventually morphed into an impatient question: Would this display of CGI magic, preposterous plotting and accumulating episodes ever end?

Where that point is reached for you in a two-and-a-half hour movie -- or if it's reached at all -- depends on how much-sustained entertainment you find in this overstuffed water ballet.

The origins story for Aquaman has been placed in the hands of director James Wan (The Conjuring), who creates a DC Comics extravaganza that immerses us in an underwater sea world full of dazzling colors, improbable technologies and a battle over who will rule Atlantis, the sunken city of myth.

A reluctant Aquaman (Jason Momoa) becomes a contender for the throne; the son of a surface-dwelling earthling (Temuera Morrison) and an ocean queen (Nicole Kidman), Momoa's character is presented as a longshot for success.

Also vying for the top job: King Orm (Patrick Wilson), another son of Kidman's Atlanna. Put Orm in the arrogant jerk category. He believes he should be king because of his pure bloodlines. Atlanna married his father after leaving her surface-bound husband -- for good and noble reasons, of course.

Momoa's Aquaman boasts a strong physique and a nonchalance about his various battles with evil, which begin with an attack on a group of pirates led by a vicious character named Manta (Yahya Abdul-Mateen II).

I'm not going to try to elaborate on the undersea world because it requires blind acceptance about such matters as how beams of fiery light exist in the depths of the ocean, how residents of Atlantis breathe without gills and ... oh well ... why go on listing all that's silly in this cornucopia of silliness?

Lest Aquaman become lonely, he's accompanied on most of his adventures by Mera (Amber Heard), a redhead who initially regards him as a hopeless case, but who eventually and unsurprisingly accepts him as the rightful king of Atlantis.

The supporting cast finds Dolph Lundgren playing King Nereus, an underwater noble who must decide where to place his loyalties. Willem Dafoe does Yoda-like duty as Vulko, an Atlantis adviser who becomes Aquaman's mentor.

Characters are made to seem as if they're floating in the depths of the sea, their hair flowing upward. How anyone gets a haircut in Atlantis remains one of the movie's many mysteries.

If you're after action, Aquaman tries (boy does it ever) not to disappoint. Wan has included everything from martial-arts combat to battles with monsters to trident vs. trident mega-bouts.

Did I mention that Aquaman's quest sends him a search for a trident that only a true king can possess, a plot device that takes the movie to the Sahara Desert, as well as to a small coastal town in Sicily?

I also forgot to mention that Aquaman's given name is Arthur and that the great triumphant moment of the film centers on Arthur's emergence as Aquaman, trident raised over his sculpted torso in comic-book glory.

Watching the movie is like reading a variety of Aquaman comics in succession, with a little ecological concern tossed in for good measure. At some point, though, you may get bored and wish you could put the books down and reach for a copy of Batman.
There's plenty of visual invention on display, but the eye can't totally silence a question from the mind: How much underwater spectacle does an Aquaman movie need before we start to drown in it?