Love in the time of racism

In If Beale Street Could Talk, director Barry Jenkins adapts a James Baldwin novel that pits the innocence of lovers against soul-crushing racism. 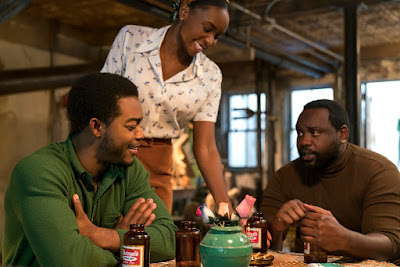 If you stop to think about it, you might be hard-pressed to come up with a long list of movies that portray love with tenderness, soul-deep commitment, and true devotion.

Among other things, a tender depiction of such a love is precisely what distinguishes If Beale Street Could Talk from normal Hollywood fare. director Barry Jenkins' follow-up to his Oscar-winning Moonlight, has moments that are illuminated by the characters love for each other and by Jenkins' love for them.

But if Beale Street -- set in New York during the '70s -- only dealt with love, it would not be doing justice to the 1974 James Baldwin novel of the same name. If Beale Street Could Talk also assays the impact of racism on the innocence of two lovers who have known they should be together since childhood.

Tender feelings collide with harsh realities that test the devotion of a young man and woman who want little more than to live, raise a family and continue loving each other.

The casting of the couple obviously becomes crucial in a movie such as Beale Street and Jenkins' has done well. Stephan James portrays Alonzo, a.k.a. "Fonny," a 22-year-old with ambitions to make sculptures from wood. KiKi Layne portrays Tish, Fonny's 19-year-old fiancee and also the story's narrator.

Jenkins invites us to fall in love with this sweet couple and we do, but he also plans to break our hearts. Tish is pregnant and it's entirely possible that Fonny will be in jail when his child is born.

Set up by a racist cop (Ed Skrein), Fonny faces a false rape charge. Tish fights to clear his name. She knows that the Puerto Rican woman who identified Fonny in a line-up did so in a confused panic. Fonny wasn't even in the vicinity of the crime.

The movie contextualizes the relationship between Fonny and Tish by bringing their respective families into focus as it shifts between the present with Fonny awaiting trial in jail and the past in which Fonny and Tish developed their relationship.

Fonny's mother (Regina King) supports her pregnant daughter; her father (Colman Domingo) also makes his love for Tish clear; he understands that he's going to have to get involved with some hustling to raise money for Fonny's defense.

In an early scene, the two families meet and sparks fly. Fonny's religious mother (Aunjanue Ellis,) disdains Tish and treats her as a wanton woman who's ruining her son's life. Fonny's father (Michael Beach) takes a different view. He hauls off and belts his wife in the kisser, a slap that turns a comic scene into something harsh and harrowing.

Perhaps Baldwin was trying to highlight poles of belief within the black community: staunchly religious conservatism vs. love-infused tolerance, the latter born of an understanding about what's needed to carry on.

Brian Tyree Henry turns up as an old friend of Fonny's who has just been released from jail and who can't shake the emotional damage of incarceration. He didn't belong in jail any more than Fonny will.

Jenkins respectfully extends scenes to allow the actors to live within them, but some of them go on too long and you begin to feel the movie's length.

Maybe it doesn't matter because If Beale Street Could Talk doesn't feel rooted in a specific time and place as much as it feels like an extension of imagination lodged in an essential moment -- one built around a deep understanding of harsh American realities and an unconquerable capacity for hope and survival.

If Beale Street Could Talk poses a heartfelt and heartbreaking question: Why must two lovers pit their happiness against a world that doesn't want to give them a chance? That sounds like the trailer for a romance novel, but -- in this case -- it's an indictment of racism that tries to crush the sweetness out of everyday life.